Today we went to see Lucia and Totò who tell us the story of Castrenzio the “wild doctor” who treated  people and animals.

Listen what remedy there was for warts.

He Castrenzio would pass a barley grain on the wart, then he would recite a prayer, and then he put it underground. Then it was watered every day and was checked if it went sour. When the seed was dry and disappeared, the wart also disappeared.

He My brother had a psoriasis in his arm and one day he met Castrenzio who said to him: what do you have, I see you strange in the face? And my brother told him he had burning red arms  from itching. You’re a fool, it is  the easiest thing in the world to cure, said Castrenzio. And what should I do? My brother said. At midnight, in order not to make people understand anything, go with the mules to the watering hole and get naked and immerse yourself in the water. 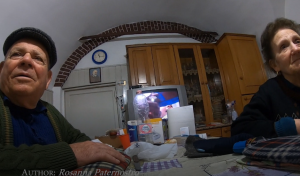 She  You have to say that in the watering hole there were two faucets: one with rainwater and one that came out of the spring water. And it was the spring water that cured .

He He really won that battle. He went there two, three times, he undressed and immersed himself and everything went away.

Mrs. Lucia tells us how they treated  children’s worms.

She He would put the garlic in the little behind and the worms would come out and he pulled them with a crochet hook.

Mamma mia: what a pain!

But these ancient remedies worked.

Listen to  this other story

He I had hemorrhoids and I was going to get operated, a friend of mine passed by and we started talking. At one point he said to me: why do you move like this. You know I have hemorrhoids. You’re a fool it’s the easiest thing in the world. Come to my house and I will give you an herb to cure it. Boil it, throw the boiling water in a bowl and sit on it until you resist the heat.

She  I would put something around the chair and everything would go away, in short, it was cured.

In ancient times these were the remedies that were used, in Sicily as in the rest of the world.

Sicilian folk medicine is one of the most fascinating chapters of the culture of this people, being mixed with Greek, Roman, Arab, Norman and Aragonese influences.

If you want to know more about how the Sicilians treated their diseases, send an email to our cultural department and our “wild doctor” will give you the perfect recipe.