The realm of Ducezio and … prickly pears! 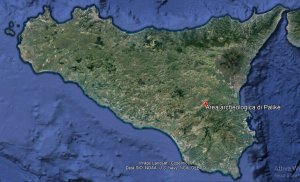 Palikè, is one of the most significant archaeological and evocative areas of Sicily especially for Sicilians who want to study their history.

This is a rocchicella or a small mountain inside the plain of Catania.

Palikè emerges from the field suddenly and in silence. 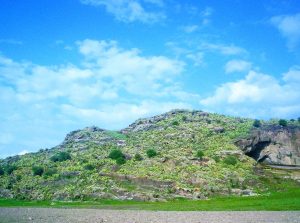 This bucolic Rocchicella of Palikè was the seat of the Siculi people, that prior to the arrival of the Greeks (8th century BC) ruled this part of Sicily.

Their leader was named Ducezio 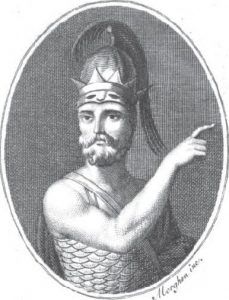 For the Greeks it was like Sylvester the Cat for Tweety Bird: a real torment!

He was exiled, no one knows how many times, but always returning, bringing turmoil to the Greeks.

Palikè, is riddled with archeological burial caves carved into the rock, and has at its base an enormous grotto, perhaps the most sacred shrine remaining from pre Hellenic ancient times: the Sanctuary of Palici 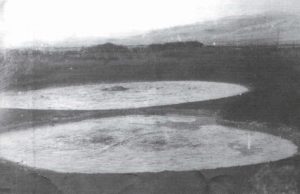 Behind this were two ponds (photo from the beginning ‘900) of volcanic origin, today extinct, that because of their gas emissions and boiling water, stirred the divine emotions of these ancient Sicilian ancestors.

The two ponds were known as the brothers Palici (the divinity).

Over time, they assumed the name of Naftia and around 1940 they were incorporated into an industry that produced cans of oxygen and dry ice… An ugly end for the ancient gods!

Palikè is really marvelous with its wild growth of prickly pear.

At the top, accessible by paths and stairs impressively carved into the rocks, are the ruins of a city from the 4th century BC.

It had, however, been inhabited even earlier, since prehistoric times, and they have found flint tools used for hunting by these Sicilian men of 12,000 years ago, as well as bones of the animals Bos primigenius, Cervus elaphus and Equus hidruntinus, (more simply: ox, deer and horse). 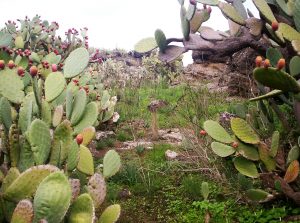 Behind the grotto-shrine there are excavated ruins of imposing constructions from the 5th century BC.

This is the hestiaterion (building for banquets, rebuilt in the photo). The two lower terraces  have service doors.

In Palikè you can also find a small antiquarium with finds of the place. 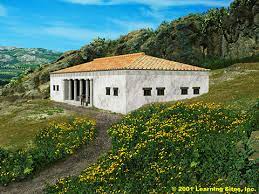