Cerami: in search of the magic potion of Serlone in the land of peace

In this episode: looking for a fiance for Lavinia, 1 euro, galactic accelerator for hitchhikers in Sicily 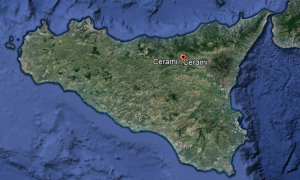 Cerami, inland Sicily, a villaage that became famous for a battle that took place 1000 years ago when the Arabs ruled in Sicily.

In these parts the people of Muhammad were defeated by the Normans, who soon replaced the Arabs in the leadership of Sicily.

Fifth domination after the Greeks, Romans, Byzantines and Arabs.

Their leader was called Serlone, he must have been tall and blond like a good man from the north, and he led an army of just 136 soldiers of Christ, while the Saracen rivals were fifty thousand. 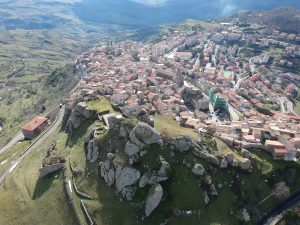 That is to say: the Arabs were 500 times more than the Normans

Well, making a quick calculation, at that point Serlone had to ask himself: We run away?

Because, as a Sicilian saying says: “Lu fuiri è vriogna, ma è sarvamentu di vita” (running away is a shame but saves life)

But, for his goodness, a white knight apparently came down from the sky and gave a hand to Serlone and his troop helping them defeat the enemy.

The white knight was the archangel Michael in person, n  ot just any one!

Ummmmm … but to me there is something that does not convince me in this story.

Let’s see if in Cerami I find the key to solve this historical enigma!

Down there is Cerami. 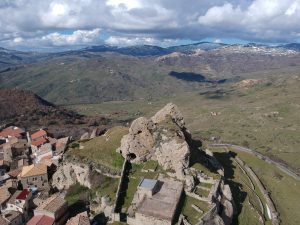 It is dominated by the so-called rocca ru liuni , the  lion’s fortress.

It is a place that has always been inhabited: from all five of the dominations mentioned above most likely, but certainly since Roman times.

Here we are: via Roma, the central street of the village.

Senior citizens on a bench: a nice prey for Smashing Sicily

Nar: I heard you say minchia and I stopped

Splendid Tip: Minchia is the classic interlayer used by the Sicilians and equivalent, just to give  an idea, in English you know. The difference is that the word minchia is not used only as an interlayer but with many other meanings and allusions. To say some of them: as an expression of amazement: my Gosh!; such as a male organ: the minchia or the penis; as an adjective to indicate a fool, or minchionel. And anyway, if you come to Sicily, at least once you have to say a sentence with the word minchia somewhere here . A suggestion? Here it is: at the restaurant, after enjoying a good dish, you can tell the waiter: minchia! 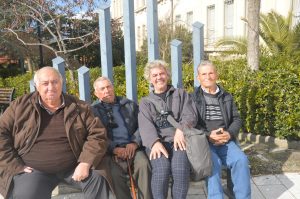 He: Since we were children we have always been together, back then we moved away for work reasons  and today because of the  old age we are still here together.

Nar: When did you go to the sea for the first time?

Nar: And where did you meet your wife?

He: In those days the mothers kept them tight and we used take advantage  when their were parties …  for the carnival they had dance parties … and here they used to use that women invited the males to dance

He: Only in those fifteen days, then the woman was always at home

We are in Piazza Marconi and those are the elementary schools of clear fascist architecture. 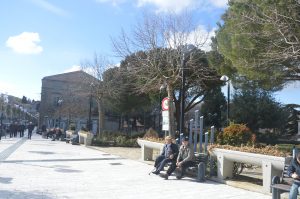 From some of these balconies it is said that Benito Mussolini also appeared, perhaps to make one of his famous speeches that once commanded respect,nowadays it makes you laugh.

It’s strange how the costumes and fashions change: a dictator then would be a comedian today.

Now the fun begins: we slip into the heart of ancient Cerami to find the clue that tells us how Serlone and his 136 men did, to defeat 50,000 Arabs

We are in the real Sicily: hinterland and traditions.

Many houses have a beautiful sandstone and many are abandoned.

You want to move to Cerami: 1 euro might be enough!

Stay calm and you will know!

Uhmmm… What a beautiful glimpse: A window framed in stone and an arch.

A Padre Pio tucked into a tiny cave.

Let’s see if anyone opens.

Nothing… there not in the house…

An open window: let’s see if we have better luck 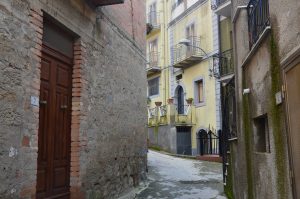 Nar: We are Sicilians who travel around Sicily and knock on people’s homes. How is it staying here in Cerami?

Lei: As long as there is the  family, your  fine

Nar: What are you cooking today?

She: Pasta with ricotta

Nar: I was already invited otherwise I would have come here

She: It’s a pleasure

Nar: What class are you?

The lady shows me the photos of the party of her 90 years.

A little kiss for me!

I must confess that every time we arrive in these little villages of Sicily I feel like moving for life.

Passing narrow alleys we arrived in this little square that has clothes hanging on the left and the sixteenth-century church of Sant’Antonio Abate immediately after that pea-green car.

Inside the church there is a feretory of 1600: 400 years that people carry it on their shoulders!

Nar: According to you why a traveler should stop in Cerami

He: For many reasons. There are beautiful little streets and beautiful woods. And then here we leave the keys attached both in the cars and in the houses: a peace and a serenity that are not easily found.

Jack Jackfly, our 4-legged drone, flies over the roofs of Cerami … ehy be careful! …

These birds one day or another will give me a heart attack!

Hey, how many clothes hanging out 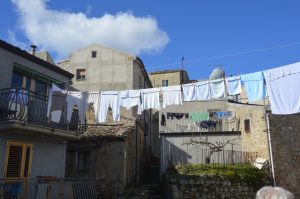 Nar: So ma’m, we always do a riddle. We try to understand, from the clothes hanging, how many people live in a house. In think in this house live a man, a woman and two kids

What yes! This is the first time I guess!

Nar: What is a beautiful young girl doing here in Cerami?

She: I study at the university

Nar: Let’s see if I also guess what  you’re  cooking: meat with sauce?

She: Not really, ragù.

She: We are waiting for the men who are in the farm: my son and my husband

Nar: Where is your boyfriend?

She: There is no boyfriend!

She: Take this   is our tradition of the feast of San Sebastiano, today. In the middle you put the orange and hang it in the bay tree and the children below try to catch it.

Nar: I have to leave but what is your name ?

She: And I’m Maria

She: Lavinia for now has to study … no boyfriends!

What a nice family.

How good we feel here in Cerami.

We have not yet discovered Serlone’s secret, but I feel that  luck will help  soon

We pass alleys and  small alleys wrapped in millenary sandstone and arrive in a beautiful little square with a great view of the mountains and an old woman with a scarf on her head and a broom in her hand.

Nar: How many clothes  hanging out, you are many at home

She: No just me and my husband

Nar: What are you eating today?

She: Nothing … I’m doing some  cleaning … in here once we made bread

Nar: Listen, is it true that after the wedding you stayed eight days at home?

She: Then, when we went out, first we went to Mass 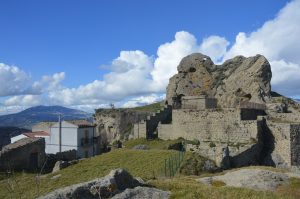 We continue the march and climb towards the rocca du liuni, the fortress of the lion, the highest point in the village.

The panorama widens and catches all the mountains surrounding Cerami.

There are the evocative ruins of the church of San Michele.

The castle and the oranges

We accelerate the pace and arrive at the top of the fortress of the lion’s: The history wraps us and even if  nothing remains of the castle the power of the stone evokes the past.

Up here , have lived  at least the following populations: Romans, Byzantines, Arabs and Normans.

In these parts Serlone overthrew the enemy army well over 500 times in number: but how did he do it,  darn it?

The legend says that he was helped by the archangel Michael, but I don’t believe it.

If there had been the var they would have disqualified him because  you cant weave a saint!

Our invisible guide tell us that it is very late for lunch and we need to speed up the pace again.

We have 20 minutes left 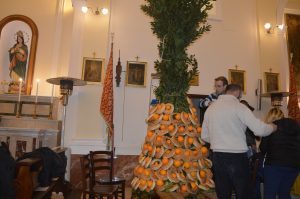 And then, here’s what happened since we triggered the galactic accelerator for hitchhikers in Sicily: (read quickly but not very much): we passed the narrowest street of the village walking sideways like the Egyptians, we took the street dedicated to the leader Serlone , we arrived at the church of San Sebastiano where outside they offered us salami and wine, and then again salami and wine and also bread and oranges; then we entered the church and there were preparations for the feast with bread and oranges hanging from a bay tree and bla bla bla; here you sees Mr. You  bind it this way  and then you hang it  on the tree; and how many people that made packages with bread and oranges to give to the whole village: here for you too and drink more wine! so they played the drums, STOP! Musical pause to catch your breath. . Tamburellata Ok we leave again: we left the church, we entered a crypt, then I remember that there was a  scented trail coming from a balcony, we saw a lady who was cooking sausage and we begged her to let us taste it, she came down and fed us; slurp slurp good good; then we returned to the square, we talked to other elderly men, we climbed the church tower and we did the usual ringing of the bells, and then … zac! Here we are at lunch! 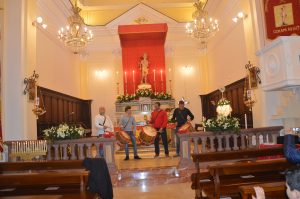 Mrs. Maria is hosting us in her country house right next to a river, in a setting of countryside, nature and mountains.

We are welcomed by a barking dog and the dish of the day is a typical local soup: u pipi vugghiutu, which is boiled pepper.

She: Oil, garlic, olives, dried Cerami peppers, dry sausage, water. After an hour we add the egg and then a few pieces of provola.

She: On Sunday morning my father prepared this soup, not for lunch, but for breakfast, and we all ate it. At the time of our parents and grandparents we needed something substantial before starting the day in the fields and this soup was perfect.

Nothing but help from heaven!

One last visit to the Washhouse and greetings to all also by Serlone. 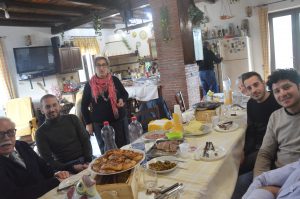