The remaining chairmakers in Sicily, today can be counted on the fingers of one hand …

It was the artisans who fixed the broken chairs, built the new ones and sometimes even rented them!

They repaired old chairs with  a few nails or inserting wedges when “s’ annaculiavanu ” which means swaying, they covered the seats by weaving cords of Agave, Nana Palm hemp. 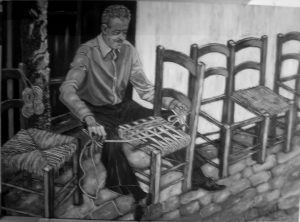 Wandering through the streets of the various villages, abbanniannu, which means shouting: ‘U siggiaru passes! The seats must be checked! ”

Or: “Cu e ca av ‘aggiustari seggi? ” which means who has to fix the chairs?”

Instead, “Lu siggiaru” and La siggiara “of the church, contrary to what it might seem, were not the artisan who built or repaired the chairs, but they were people who, in a corner adjacent to the church, rented chairs to the faithful to attend the Sunday mass or during religious ceremonies.

Carmelina Severino narration: “Ah, if there were still uncle Luciano Padalino. He was like a sacristan, but he had a particular task: he was lu siggiaru. He nun sulu lo impilava uno ad uno which means not only did he stacked them one by one, but he fixed them as well. And everyone went to him to rent a chair and attend mass “ 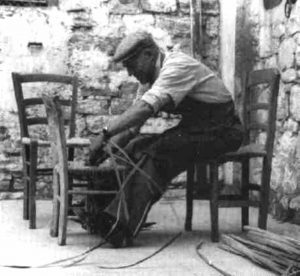 In many churches until the 1960s there were no benches like today, arranged in a row, therefore, if you did not want to attend the functions standing, you had the possibility to take the chairs for a symbolic fee (5/10 lire) .

Mr. Catalano Cozzo Matrice:  You paid something, 10 lire, to rent the chairs. Before there was this custom

Splendid: Mr. Catalano, while we’re at it: you eloped

Catalano: No I have never got married

Splendid: Maybe that’s why he is in a good shape at 82 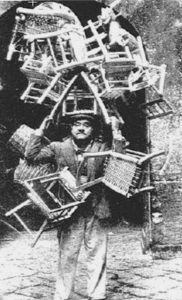 The chairs in the church were taken by women and children, placing them neatly in two rows while the men attended mass standing at the back of the church.

Carmelina Severino narration:  “I have two left here in my little secret garden, two stuffed chairs, which take us back in time. I remember that as a child I used to go by Uncle Luciano and tell him:“ na seggia ” (a chair) and I gave him 4  coin. And I ran to take it to my grandmother Teresa who was a great devotee of the Madonna della Catena. And when the benches arrived instead of the chairs, we always went to sit there, in these chairs of Uncle Luciano, under the gaze of this Madonna “”

The siggiaru or the church siggiara, at the end of the mass, went to the sacristy and donated part of the proceeds to the priest.

We take this opportunity to remember Rosa Balistreri who from sacristan and “siggiara” has become one of the greatest voices of our land. 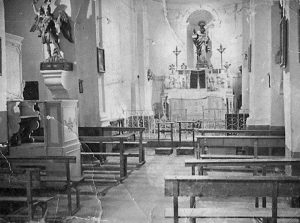