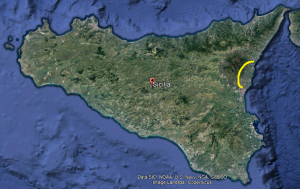 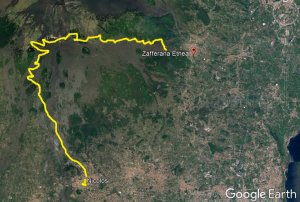 The SP92, also known as Marenevefuoco, is the road that reaches the highest point for a vehicle on Etna (2000 meters).

It is called Marevenevefuoco because following it: you can see the sea almost the all time; in winter at altitudes above 1000 meters it is often snowy; and because from time to time it happens that the volcano arrives with its magma up to the highest altitudes (2000 meters) often destroying the roadway!

But, rest assured, in this last case you would know it weeks before!

We start from Nicolosi, a splendid Etna village at 600 meters above sea level. From here starts the SP92, which begins its ascent towards the highest volcano in Europe.

KM 2 After a couple of kilometers you will see the Monti Rossi, an extinct volcano, one of the many children of Etna. From here began the eruption that destroyed Catania in 1669. From its top it is very easy to imagine the trajectory that the lava took to the Ionian Sea. All the travelers of the past who visited Etna, since the 1700s, always stopped here at the Monti Rossi and painted its appearance. 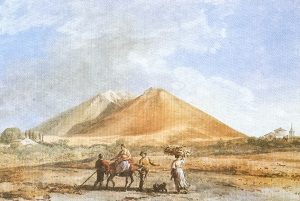 The SP92 climbs with Etna in the background: with its 3300 meters it dominates the whole landscape.

At the top there are 4 craters that from time to time are felt with roars and eruptions.

But rest assured: Etna is not dangerous because it is far from inhabited centers.

The nearest village is 1000 meters above sea level and the lava would take months to reach it!

The broom with its colorful yellow flowers dominates the vegetable landscape and in Spring it gives off a very fragrant smell!

To the right and left you can see many lava flows of the past.

KM 3 On the right there is a mine for the processing of lava stone. In this part of Sicily, many constructions are made with this hard and resistant stone.

You can see very ancient lava fields with some scattered trees here and there.

In the distance, from all sides, extinct volcanoes of all sizes appear ready to be climbed: as we said before they are the so-called “childrens of Etna”.

There are nearly 400 of them all around the volcano.

KM 6 Like this one on my left. Monte San Leo.

As you go up there are fewer and fewer holiday homes and more lava fields.

This mountain road is famous, compared to its analogues, for its wide radius of curves that make it pleasant to travel.

Towards the twelfth kilometer the road is surrounded by a dark lava field. The blacker color of the lava means that it is more recent. This is from 1983 and some trees are starting to grow while others form islands of vegetation, not having been touched by the eruption.

Hey, that house was flooded with lava!

KM 14.6 This detour leads both to Monte Vetore, a child of Etna to be climbed, and to a beautiful nature trail: Monte Nero degli Zappini

Time changes all the time.

Meanwhile, the vegetation has now disappeared: not even a tuft of grass: it is all black, all lava!

KM SP 19.2 – 1900 meters above sea level Here we are in Piazzale Sapienza, the highest point that you can reach with a vehicle.

The top of the volcano imperiously dominates this landscape.

Down there the sea.

Here you park and you have two possibilities to reach the top: the cable car up to 3000 meters and then the last three hundred meters on foot. Or walk from here!

There are restaurants, bars, souvenir shops and even two craters to climb: the Silvestri mountains.

Which do we climb? The easy one on the right or the huge one on the left?

For us at Splendid Sicily there is no doubt: the huge one on our left!

A beautiful lava bomb, launched from the Etna crater during an eruption, welcomes us.

We meet many ladybugs, which reproduce here.

Here we are at the top: there is a wonderful view and another ladybug.

I have an idea: I dive into the crater.

From now on the road goes down again.

On this side there are several nature trails that allow you to see the Valle del Bove from above, a real postcard of Etna: a huge black valley into which lava from an eruption often pours.

The SP92 continues its descent among brooms, chestnut trees and lots of lava stone.

The sea offers a beautiful view, down there.

KM 26.5 On this side there are also many caves formed by lava like this one, called Cassone.

KM 30 – We are at 1250 m. a.s.l. There are more and more chestnut trees to the delight of the Sicilians who come to pick them in autumn.

And they eat them roasted on the grill, the so-called roasted chestnuts.

On the left is the detour to Monte Zoccolaro.

This detour passes through beautiful fields of delicious Etna apples and after about 5 kilometers it ends right where it begins the beautiful path that leads to see the Valle del Bove from above: the Monte Zoccolaro path.

But what is that lady doing?

Excuse me ma’am, are you a mushroom hunter?

“My husband, but it’s not sure that he finds them”

And how do you eat them?

“In the simplest way: garlic, parsley and cherry tomato”.

We are going to climb our monte Zoccolaro.

Who knows if I meet the famous Etna wildcat,  it is usually so scared that it always hides.

Puff, puff, pant, pant  it is a nice climb at the beginning of the path.

Here we are finally!

At the top there is a cross and a beautiful view of this gigantic valley.

On the left, the imposing black shape of Etna; on the right the sea as blue as the sky.

Let’s see how long it takes for this piece of wood to get down there: about 10 seconds, mamma mia! 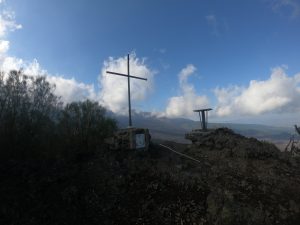 It’s time to go back.

The Marenevefuoco continues its descent among chestnut trees, brooms and the first holiday homes that begin to appear.

KM 39 Here we are in Zafferana Etnea, 700 m a.s.l. Here in 1991 the lava came a step away from the town. It stopped right here, and its inhabitants put this statue of the Madonna as a sign of thanks for the danger escaped

And just as we are leaving we meet a Sicilian fruit vendor: figs, grapes, apples, peaches.

Ok: give me these beautiful figs that with  some bread and a glass of wine will be my dinner tonight!