Out and About, episode Two

– The sulfur mines were a very dramatic moment in the history of Sicily when even children were forced to work underground where every now and then an explosion killed the poor Sicilians. There are several sulfur mines scattered around the island and today they represent a fascinating tourist itinerary.

– Municipal wash houses are also scattered in various municipalities of the island and still some Sicilian, young and old use them. Like here in the beautiful village of Itala, eastern Sicily.

– These are the ruins of Morgantina, 5th century B.C., in the center of Sicily. You can still admire the whole city with a theater, and in a house we can still see the welcome greeting, namely Eyexei, on the front door. 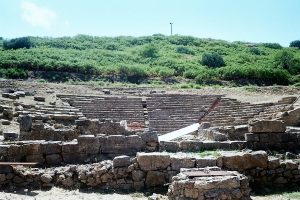 – This is the fabulous fresco of the Triumph of Death, now visible in Palazzo Abatellis and detached from the courtyard of Palazzo Sclafani, also in Palermo. Unknown author and date, but it should have been painted around 1440. One could spend a day watching it in delight. Death on horseback bursts into this enchanted garden. It fires its deadly arrows which strike men and women from all walks of life. Superb artistic masterpiece to visit at the Palazzo Abatellis in Palermo. 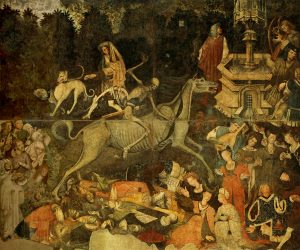 – We are in the center of Sicily and this is the monumental fountain of the Granfonte, in Leonforte. Built in 1651, it has 24 cannulas from which water comes out, and 22 windows that open onto a panorama made up of infinite fields of wheat. It was both a trough and a wash house.

-This is the Cuba of Santa Domenica, on the banks of the Alcantara river, eastern Sicily. In the midst of the renowned vines of the area, in the middle of nowhere, there is this extraordinary masterpiece essentially made of lava stone and datable according to some to the 6th century AD, according to others to the 10th century AD. The interior must have been full of frescoes. In the center, above the entrance door there was a mullioned window. There is a beautiful dome typical of these Latin cross churches. 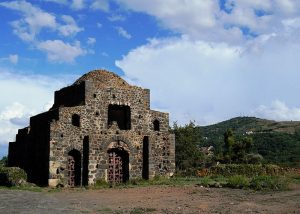 – This is a 94-year-old woman who collects carobs, a symbolic tree of Sicily. Once they were given to mules but in times of war they became food for humans as well. This lady has been collecting them since she was little and she has eaten a lot of carobs in her life, she told us. Maybe carobs are an elixir of longevity? 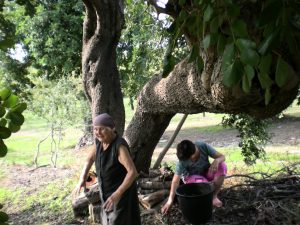 – Our crew made a report in Castelluccio di Noto, a place that combines landscape and history, as always here in Sicily, since in Castelluccio there is a necropolis and a prehistoric village and a medieval castle. There are also traces of huts and this monumental tomb called the “Tomb of the Prince” with four pillars. And together with the reportage, our President Giovanni Vallone also had a picnic on the spot.