Out and about, episode One

– Palatine Chapel, Palermo a masterpiece of the so called Arab-Norman art, XII century

– Acicastello Castle, entirely built in lava stone at the bottom of the Etna volcano

– Salina Island or Dydime, which in Greek means twins, because when the Greeks arrived in these parts, in the distance the Island, because of the two volcanoes,  of Salina seemed to them two islands. The two inactive volcanoes that characterize the island are actually joined by a piece of land.

– This is the beautiful nature reserve of the Irminio River, western Sicily. An ideal place to take a bath and enjoy the Mediterranean nature.

– And here is the cathedral of Noto, a Unesco heritage city for the Baroque style. The spectacular Sicilian Baroque certainly is enhanced in this city of eastern Sicily. We recall that the baroque of eastern Sicily was born as a reconstruction following the catastrophic earthquake of 1693. In spite of the evidence, the Sicilians built sumptuous buildings, almost wanting to challenge nature, and in eastern Sicily the baroque, unique in the world, is characterized by an excessive elaboration of volumes and shapes. 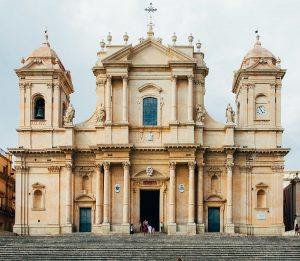 – This is a splendid place: Acitrezza in the province of Catania. There are these huge stacks in the sea, called Faraglioni, and one of the most beautiful views of Etna in the distanceThe promenade is full of are restaurants along the seafront that prepare excellent seafood risotto and pasta with clams.

– An all-Sicilian magic. We are at the Oratorio dei Bianchi in Palermo. This is the Bab el Fotik wooden door dating back to the Arab period. through which, in 1071, the Norman Roberto il Guiscardo made his entrance during the capture of Palermo. To celebrate the reconquest of the city, the Great Count Ruggero had the gate preserved, renaming it Porta della Vittoria, having a representation of the “Madonna della Vittoria” painted on it. It is located in this splendid museum among the wonderful stuccos of Giacomo Serpotta. 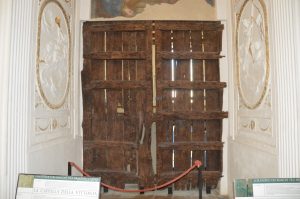 – And here is the Roman aqueduct of Termini Imerese dating back to the 2nd century AD. It represents the largest Roman architecture of its kind in Sicily. Between ups and downs, the aqueduct remained in use until 1860. It began its journey from the nearby Mount San Calogero and extended for about 8 kilometers, between ravines and valleys, until it reached the inhabited center of the very important Roman city. 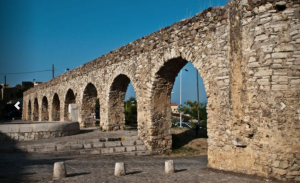