Roccafiorita: the story of the monolith that took life in the village of the olive-children

In this episode: a beautiful Sicilian Befana, women on the balcony, the Danish that says minchia, mini market, mini museum, mini cemetery, Hamburg on Mount Kalfa, extreme of Sicily 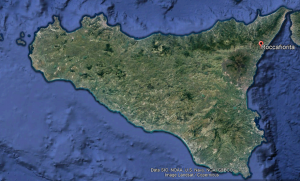 In this valley there was an enormous rock, gigantic, white and hard.

In short, a monolith of enormous proportions that was  full of flowers.

The fact is that the years pass and quadrillion of trissillion years later arrive the bearded men..

They see this monolith full of flowers and at that point one of them had to say: let’s hit this rock with a pickax and make a village and  that someone  later called Roccafiorita which means blossemed rock. 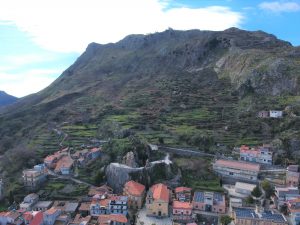 He took a series of backslapping, and  hit right and hit left, they hit  with a pickax this monolith and built houses all around it.

And so it was that after triplets of filoter of years later their descendants put a Madonna in a cave, they put some lookouts here and there and right at the top of the summit, of a mountain called Kalfa, they erected a small church,  child  of the valleys of Etna and the Sea.

Strafobillions of  thousands of days later, we arrived.

Here is Jack Jackfly, our majestic drone, above the Roccafiorita monolith.

We walk without meeting anyone.

Jack Jackfly has taken a prey from above!

She: What  elegant I look like a befana (christmas witch)

Nar: How old are you?

She Do you want to know my name? Ha ha … Nunziata. One of my sons is the town traffic policeman. No one has reached 100 years here

Nar: We hope you get there then

She: Lets hope so

She: Today I ate some pasta with oil

Nar: Can we take a picture together 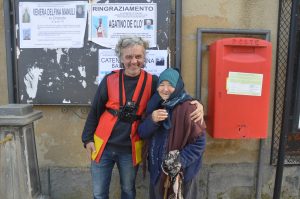 We continue to walk among the silent streets of Roccafiorita.

Hey, look over there: a nativity that is here since Christmas.

It was built in a corner of the monolith: brilliant!

Hey, that’s the traffic policeman, one of Mrs.  Nunziata’s sons.

Nar: Good morning, do you come everyday with the fish ?

He: No once a week

A tractor with a man inside.

He: I am a cook in Taormina and I spend my time planting broad beans and  peas in the countryside. Roccafiorita is a relaxing village, today it is Saturday and there is also the post office open. To a traveler who comes here I would make  him eat natural things: vegetables, local meat, homemade pasta and bread. Genuine things!

Nar: What is your name?

Nar: What are they called the inhabitants of Roccafiorita?

Ok let’s take the march for the village of the Ciuritani! 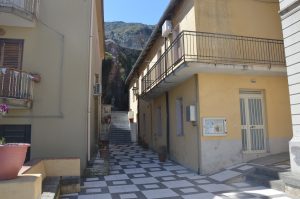 Let’s see if this time we guess how many people live there: well, I’d say a man, two women and a child.

Darn it:  There not at home!

Ehy, Ciuritani, eventually  let us know if we guessed ?

Jack: Hey over there, can you hear me? I’m Jack I’m flying over the monolith village.

There is a wonderful view: you can also see Italy!

I’m going around the village.

Ehy: right at the bottom there is a lady looking out the balcony, catch her! 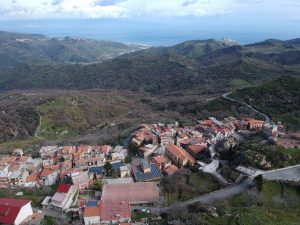 Here we are … puff puff … what a splendid sight!

Nar: Ma’m you can  you tell us why it’s called Roccafiorita?

She: Because there was a flower in the rock of the town and the prince picked it up.

There is a beautiful view from this room: yes, here I will put the living room

There is also a nice little garden: I would plant a lemon tree there

Stairs to be redone

Here I do the bedroom

With not even 20 thousand euros you can find a house in perfect condition of about 50 square meters.

Uhmm what is this eye!

I think it was a basement … I smell wine …

Here are the keys hanging

Let’s see who is there

Nar: I was passing by, but  you leave the keys hanging?

She: This is the village of tranquility. We are about 100 but we are at peace

Nar: I understand: are you a ciuritana?

This staircase takes us to the small square of Roccafiorita

There is everything  that  there must be in a town square: the mother church, the town hall and a bar, the only one in the village, of course.

You should know that Roccafiorita is a destination for bikers and cyclists.

In fact it is an extreme, and like all extremes it is a place of pilgrimage for those two categories.

Roccafiorita has in its mount Kalfa the highest peak of this beautiful internal road that unites one of the most famous coastlines in the world, that of Taormina, with that of Santa Teresa di Riva.

Let’s see those cyclists a bit

He: I live in Sicily

Nar: So then you speak Sicilian?

He: No Danish. You look French

Nar: No I’m from Palermo, your pink and black jumpsuit has the colors of the Palermo soccer team.

He: No they are the colors of the tour of Italy. My name is Thomas.

He: I live in Motta Sant’Anastasia, 60 kilometers from here.

Lui: Unfortunately not too long to speak italian.

Nar: But after 5 years you have to speak Italian.

Okay, so at least our Danish friend learned to say minchia.

And If in Sicily you know how to use the word minchia, you have already understood everything

We enter in a bar

He: Well we made a bet. But we are here and we love our town. And so it’s worth betting.

We also have a minimarket, I think the smallest in Sicily.

We have the primary goods: some bread, some fruit and the pasta that already knows in which table to go etc etc

In short: those pears go to Mrs. Maria; that pack of pasta to the traffic policeman; potatoes to the mayor etc

If I feel like buying something here I will turn things upside down!

Right behind the bar there is the little street that goes into the monolith: lets go to the heart of the monolith Jack!

I from inside and you from above.

Here is the stone flower that gave rise to the whole village of Roccafiorita.

It is exciting to walk wrapped in the rocky walls of this huge boulder. 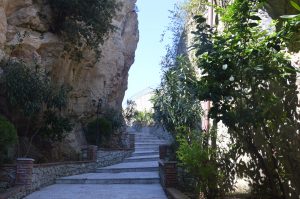 You feel the past.

Emilia Mazzullo, Roccafiorita councilor “Welcome to the small community of Roccafiorita. This rupestrian environment is our symbol. Inside this cave there is the Madonna dell’aiuto  ( Holy Mary of succour) loved by all the people”.

We climb to the top of the monolith.

Ok, let’s go back down to the village.

A few steps and we’re back in the center.

There are three objects: a box of religious offerings symbol of the small church at the top of Mount Kalfa, a sack of wheat symbolizing work in the fields and a bat!

Bat with which the small church was built above Mount Kalfa, a real attraction of the place and which awaits us after lunch for the digestive walk.

The mayor is waiting for us in the only other activity of the place besides the bar: the small restaurant.

We go Back from the square and this time the bar is full of bikers.

Hey, here is the  garden of the olive children.

An olive tree is planted for every child that is born!

This is Francesca who is already 7 years old.

This year only 3 were born, a few months ago.

There is the mayor and the councilor and they feed us with genuine and amazing food!

He: This is a dish of beans with Pork Scratchings

Now here is the pasta alla norma wich is with sauce and eggplant.

The pasta finished but we continue to eat, eat, eat …

Mayour Concetto Orlando, mayor “Roccafiorita is a place that offers you different possibilities. Here in half an hour you arrive from the sea and find yourself in a landscape in contact with nature. And then our food is genuine. The hospitality? The visitor will give his opinion”.

We climb to Mount Kalfa.

A dream at not even half an hour from the village.

First, of course, there is to see the mini cemetery of Roccafiorita!

A wonderful panorama also for the spirits of the dead  Ciuritani .

Climbing up Mount Kalfa a number of small huts invite the visitor to make a nice BBQ before they get to the top.

Mamma mia guys: sea and Etna touching each other with a finger

We are at the top, at 1000 meters, and we have idealized the journey as a motorcyclist or a traveler would do: Roccafiorita, Mount Kalfa, extreme of eastern Sicily.

There is a sundial and a small balcony that dominates the underlying world.

Jack Jackfly is making a dream flight: the narrow streets that climb the valleys, the villages embroidered on the slopes and its majesty Etna, the giant!

Here at the top there is the symbol of Roccafiorita: the little church of the Madonna dell’aiuto.

Inside the offerings of the faithful who have received a grace: locks of hair, depictions of miracles, children shoes.

And now, as usual, it’s time to go up to the bell tower: irresistible! 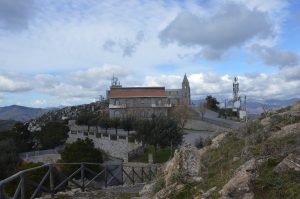 Outside the church there is the pilgrim’s house that will host the traveler who will pass by these parts.

We are welcomed by Martina, a German who met a ciuritano in Hamburg, lived there and then came back here.

They prepare these beautiful products, local and genuine and give rest to cyclists, bikers, simple walkers and anyone who wants to come to this splendid place of peace.

This is the food they offer and even if we have eaten we taste this and that.

And even here, clearly, something microscopic could not be missing, from the guinness of the primates.

Here are the smallest artichokes in the world, a real delicacy of the place!

She: Yes I got married to a ciuritano!

I’m from Hamburg, far north. And now I’m here in the far south.

What is the difference between Hamburg and Roccafiorita? Well … in Roccafiorita there are less people.

Now it is time to say goodbye to all our ciuritani friends.

We leave, but as a pilgrim from the house of the pilgrim would have done: in fact, we take, just behind Mount Kalfa, an internal road that, winding through the valleys, reaches the underlying village of Graniti.

We are immersed in peace. 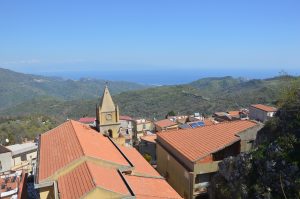