Here we are in Sicaminò, the village of which the Duke was the owner but that now is  in shreds.

Sicily is full of feudal villages, often abandoned, and around the master’s house  where also  built  the houses of the people  in  his service. The powerful Sicilian aristocracy took root on the island since the arrival of the Normans, in the 11th century. Among castles and feudal villages the powerful nobles ruled over the people.

In the village of Sicaminò the people worked  in the fields for the Duke, and sent their children to the school named after the Duke’s wife: the beloved Duchess Magda.

There was also a shared oven, where now we slip in, and where the peasant women once made bread and it is said that the Duchess Magda always put some money in the pockets of the women of the village.

There was also a beautiful church where all together, nobles and peasants, gathered to pray.

Then everything vanished: the Duke was reduced without a penny!

Today only one person lives there, known as the Mayor.

He lives with Barabba, a rooster. 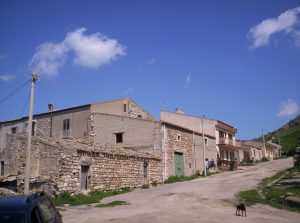 At home they kept reminding  me not to forget to bring some products from Maniace, famous for the genuineness of meat and cheese.

SHE: You have to get the black pig. Here they come from all over Sicily for these pigs, they are bred in the wild of our woods. If you  go there you meet many that are  free.

NAR: I take a little bit of everything, you take care of it ma’am.

SHE: Here have a  taste of the Zuzzu: pork chops in gelatine, seasoned with salt, lemon, pepper and bay leaf. A Sicilian specialty!

The pork jelly or Sicilian liatina, but also Suzu or zuzzu is a typical dish of  the Sicilian cuisine, diffused mainly in eastern Sicily. It is prepared by boiling the poor parts of the pig, such as the skin, paws, head, tail, tongue and ears. The procedure also includes the addition of bay leaf, lemon, vinegar, chill pepperi and  black pepper. In short, dear friends: If you come to Sicily, go to a butcher shop and get a nice slice of Zuzzu! 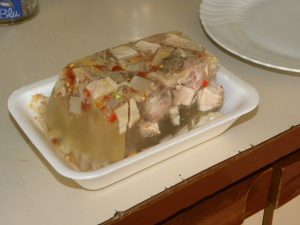 Nar: Is that an antique watch?

Nar: What class are you?

Nar: What did you do in life?

Nar: It is true that the shepherds become a bit poets because they always think

He: Yes its true.

Nar: The sheep to whom your were fond of what was her name?

Nar:  In the weekend back in your days you used to go to the sea?

Nar: And how did you meet your wife , did you take her to the club?

I met her in a street in the village and I told her I liked her and she said to me: it’s fine with me but you have to talk to my parents first.

Nar: If they didn’t agree, she would do  the fuitina

Until a few years ago Sicilian men were very jealous of their daughters and almost never gave consent to marry. And then the Sicilian girls secretly agreed with their fiances and planned a love kidnapping called: a fuitina. It was a real escape: on a motorcycle, on foot, with the donkey … often with the complicity of friends or relatives. The couple disappeared for a few days, the woman at that point was no longer untouched and the father could not help but agree to the marriage.

Nar: To be 90 years old you look great

You  didn’t tell me your name

He: U scuraru, but I don’t know what that means 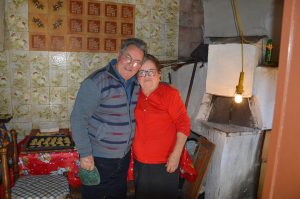