On December  14 2019 in Corleone, the work and commitment of Sister Amalia is publically recognized in an award ceremony,   Sister Amalia,  born Grazia Genovese ,  in Catania in 1951,  and  lovingly cares for the House Museum located in the heart of the historic center of Corleone and dedicated to the founder of the Order of the Sisters of Santa Chiara, the venerable Mother Teresa Cortimiglia. 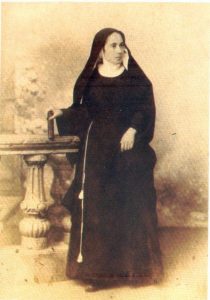 She lost her father when she was young but her mother remarried a man  who was also  wealthy and immediately became attached to Biagia.

Becoming a nun, she wanted to buy the current House Museum thanks to the money of her adoptive father.

One hundred years later, we visit this place.

On the lower floor you can still see the poor areas of the kitchen, where the objects that were used for daily life are kept. 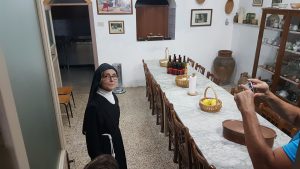 On the first floor, instead there are some sacred vestments on display that were worked and embellished by the hands of the embroiderers of the embroidery course that was held at the Institute.

Also, in particular,  the figure of the Child placed in a display case is striking.

It is said that Mother Teresa possessed a small statue that she used to call with the name “Ninno mio” that is “my little one” and that she always carried with her, making clothes, shoes and various objects for the Child.

A popular story motivates the ruined fingers of the small statuette with the fact that one night, while it was stored inside the nun’s bedside table, the effigy began to scrape from the inside of the drawer to ask to get out of it.

Inside the adjacent church, illuminated by a small flame, you can see the founder’s tomb, visible from a window with the grate inside the structure.

On the upper floor there is the bedroom which preserves the tools of penance with which the devotee flogged herself.

Sister Amalia brings us  to visit the house museum with enthusiasm, but before saying goodbye she shows us the “sacred wheel” still attached to the walls, difficult to open because it has been in disuse for some time. 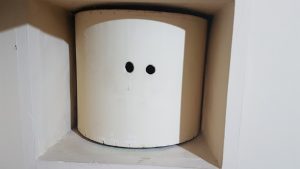 Here the children were still brought in swaddling clothes: orphans who found hospitality and who were also educated in this place.

Almost  hundred years after her birth, the spirit of Mother Teresa Cortimiglia still lives within these walls. 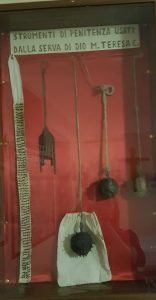