The coffee vendor and other curiosities

The coffee vendor and other curiosities

Here we are again to talk about an ancient craft that is no longer practiced “the Coffee Vendor”.

The coffee vendor went around the alleys of the town in the early hours of the morning,

Now let me show you how coffee was once made. 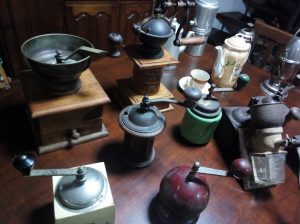 These are ancient roasters, they would put the green coffee beans inside and put the roaster on the fire.

Once the roasting was over the coffee was ready to be ground and to do this they used coffee grinders.

Here on display several grinders and also an ancient wall coffee grinder that was hung with nails.

In the past, coffee was obtained by pouring: roasted and ground coffee was put into a container, boiling water was poured over it and left to rest for a while, then it was filtered and served. 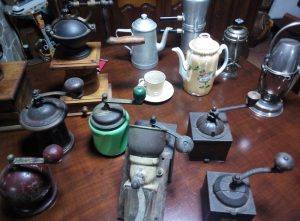 It often happened, however, that in order to save money they used less coffee and more boiling water to increase the quantity: the result was the now famous “family coffee”, a cafiata, better known to us as “Acqua i purpu” (octopus water).

From my  grandfather story, he drank coffee in a particular way, placing the saucer on his lips and slowly pouring the coffee that was in the cup, to be at the right temperature to be drunk.

Today all these objects are not used anymore, they have been replaced by our moka and by the electric coffee machines, using pods or capsules. 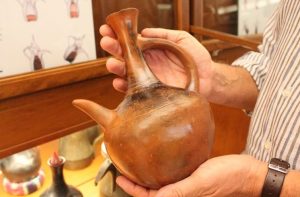 In 1686 a Sicilian, Francesco Procopio dei Coltelli, opened in Paris, in front of the Franςais Theatre, the “Cafe Procope”.

It is known that he was born in Sicily, but the sources do not agree on his hometown: if, in fact, a long tradition wants him to be native of Aci Trezza, where thanks to the trade of snow from Etna (historically relevant activity) 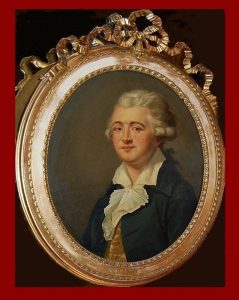 Procopio would have made ice cream, instead a more recent hypothesis places him native of Palermo, based on a certificate of baptism found in the parish archives of the church of Sant’Ippolito located in the  Capo neighborhood of the capital.

It is really true the Sicilian saying: “Cu nesci arrinesci” (who expatriates is successful).

The origins of coffee are attributed to Ethiopia, in the Abyssinian region of Kaffa, from where it spread in Yemen, Arabia and Egypt.

Coffee arrived in Europe around the seventeenth century, however Arabs had been using it for many centuries.

In Italy coffee is not produced and coffee beans are imported while still green.

The great importation in Sicily passes through the ports of Syracuse and Pozzallo, which receive several million kilos of coffee per year destined for Sicilian roasting plants.

Italy does not produce coffee… yet in Palermo, for some years now, a small agricultural company has become a national case, since it was the first to successfully plant and cultivate a plantation of Arabica.

We are talking about the two brothers Rosolino and Benedetto Palazzolo from Terrasini (Palermo) who collected their own beans, after a work of study and research started from simple curiosity.

For 5 years , the Palazzolo brothers have started an experiment with coffee, a novelty for Sicily: ≪We had 2-3 plants, bought by chance in a nursery, but everyone told me that here you cannot produce coffee. So I started to understand how the plant grew and what its needs were, and three years ago I managed to get three blooms in a month and a half. Driven by curiosity, we then obtained the first production, with minimum quantities but excellent results”. 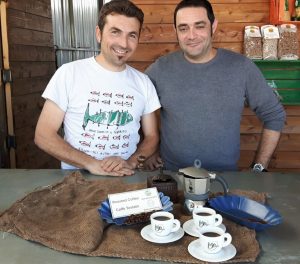 The productions of coffee made in Sicily for now are extremely limited and experimental.

Among other things there is to consider that the varieties of arabica that today are cultivated in the greenhouse, in the course of the years could adapt to our climate and the progeny, duly selected, could also be cultivated in open field.

The Sicilian climate, with the alternation of hot summers and cold winters, could represent the future of this cultivation. 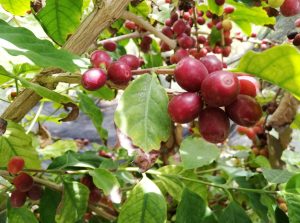