The ethno-anthropological museum of Agira

Agira, Sicily interland, a village perched on a hill.

A hill that has seen the inhabitants of the stone man followed by about ten Sicilian dominations up to us, today, here, with a drone and a go-pro.

The history of this place is so ancient!

Here was born Diodorus Siculus, just before the year Zero, one of the most important historians of antiquity that traveled left and right arriving in Egypt.

Can you imagine  starting from Agira, center of Sicily, riding a horse and arriving in Egypt? 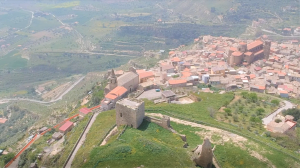 Professor Torrisi introduces us to the museum

Uhmmm what is this?

He: We represented the ancient trades. It is one of a kind because we put dummies that represent the Sicilians at work, as if they were still here with us ”

There is the quartararo, that is the one that made the containers to take water.

He:  That’s u cantaru, which is the toilet with the lid as they used it in ancient times …  thats the way it was once !

This is the tinsmith with a beautiful black Coppola!

Here are some beautiful photos: The country school with the sheeps parked, the broom vendor, a  farmer burned by the Sicilian sun!

He: here we have the woodshop

Look how nice, he really looks at work right now with his hair soiled with sawdust

This is the barber. Everything happened here. The guitar was played, he was also a dentist, he had leeches to pull the sick blood …

He: the barber at Christmas gave the scented calendar with the naked Ladies… So one could imagine what he wanted!

Can you believe  these Sicilians!

They put perfumed essences on calendars with undressed women!

He: Look, this is the spittoon 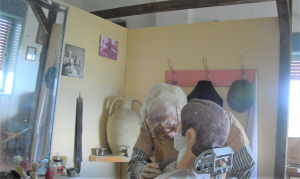 Nar:  Professor Torrisi is this an antique blender?

He: No, this was to get his enema! He put a liter of water and a little oil and put it in the butt.

Hey, what are these big underwear ?

He: They are the clothes of the first nights, luxury women’s clothes

I understand… How times just changes … 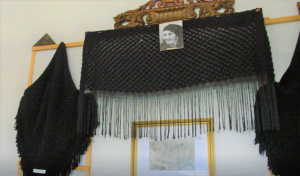 Then Professor Torrisi takes us into another room where we see a wonderful plastic model of Agira in cardboard and polystyrene.

Then we close it, we thank and continue our journey. 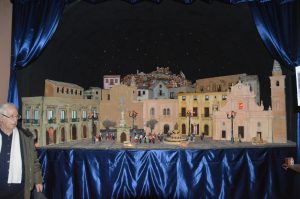