My name is Riccardo Termini and I live in a small town in the Sicilian hinterland: Polizzi Generosa.

And I’ll tell you about an ancient instrument, the Sicilian friscalettu, the king of our instruments together with the tambourine and the maranzano.

The friscalettu already we find it depicted in the times of Sicelioti, the Greeks of Sicily, in the V century b.C.

It has a melodious sound with seven holes in the front and two in the back and is made of reed that is harvested from November to March on the nights of the waning moon and must rest for about two years before being used.

The part where you put your mouth is made of olive wood, fig or oleander.

As a child I immediately fell in love with this sound.

I was 8 years old and in the towns of Sicily it happened that someone played it during the feasts.

And I haven’t forgotten it.

I wanted to buy it but I couldn’t find it anywhere because they were built only by some skilled craftsman.

After a few years I managed to find it and from that moment I decided not only that I had to learn how to play it but also that I had to build it.

And so, documenting myself with the elderly and gaining experience, I began this adventure.

My dream is to pass on our traditions that absolutely must not be lost. 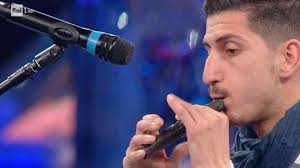