The nativity of the ancient Sicilian crafts

The Nativity of the ancient Sicilian crafts

We are in Maniace, a village nestled between the mountains and springs, in the eastern part of the island with Etna, Majestic and imposing, to supervise the sky of Sicily.

Here is the story  about a river that was coloured in red during a bloody battle between the Arabs and the Normans and a castle that belonged to Horatio Nelson and its descendants, until the end of the twentieth century.

During Christmas the inhabitants realized one of the most beautiful nativity of the  Trinacria, the ancient name of the island. 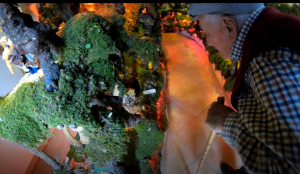 A real ethno-anthropological nativity full of curious characters from  the Sicily  of one time.

We went around  it along with Mr. Filippo, a local elder.

He: This is the bake shop, she spreads the bread and the husband puts it in the oven. Down here is the traveller  and that’s me: the Peasant

He: That is the Ciaramiddaro (in Sicilian, the Zampogna the player)

The Zampogna, together with the mandolin, the Fiscaletto, the tambourine and especially the Marranzano, is the typical instrument of Sicily.

And the Tarantella the typical dance.

He: This is what drags the steers to clean the ground or to carry something.

He: This is the shoemaker. I still remember it as it  if was today.

He: This one is shearing the sheep. Once the women worked the wool with their hands, they soaked it and made the clothes.

He: At Maniace the women went to the river to wash. They all joined together and shouted: Let’s go and wash the clothes cummare! 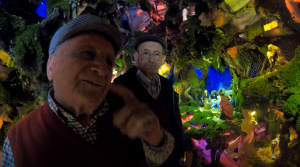 I love being in contact with the Sicilians of one time , always generous and hospitable.

Sicily is the land of the sun, good food and hospitality!

He:  The pasta was made in these  big pots, once a week, on Sundays

He: This is the charcoal burner. He used to do an  important job: he cutted wood and then made  fire  to make coal. There was no heat once and the charcoal served to warm us

He: Here at Maniace in the evening we were all in the dark, there were lanterns with oil. The light came in 1965.

He: These are our mothers who made clothes

He: Yes, of course. He stayed  two days. I remember when he told the legends of the Bandit Giuliano. It was like this: I want to sing the life of Salvatore Giuliano, the modern brigand and  mischief…

Christmas, in Sicily, as in the whole world, it is beautiful.

And if you come to Maniace you will discover yourself all the other characters of this nativity.

But, above all, do not miss the sausage and the walk to the Spring Trail.

A  Splendid Christmas to everyone! 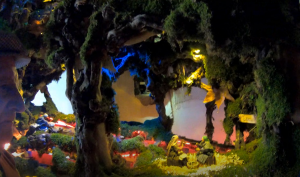