These are some of the names with which the sorbus are called, once very popular fruits and today almost disappeared from Sicilian tables.

The sorbus tree in Sicily is present in mountain forests, in particular on the eastern side of Etna, in the Madonie Park and in some areas of the Sicani Mountains. 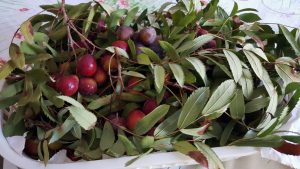 The fruits of the sorbus were more widespread in past centuries among farmers and shepherds; in the lasts

decades, consumption and diffusion have decreased.

Today they are rare.

They are harvested in autumn, but when they are picked up they are not edible, they are consumed gradually

As they ripen during the winter, when they change from red to dark, becoming soft, floury and sweet. 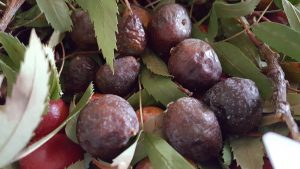 To make them ripen, once harvested, there are two techniques: one is to store them in crates covered with hay; and another, true folk art, is hanging them on a bunch called Conocchia, which is what Zio Peppino is preparing.

The conocchia then hung in the sun, perhaps with a hook, or even inside the house.

The vendor who came from Etna, and who went around the Sicilian villages, shouted in the streets of Sicily: “Haju li zorbi di Catania!” which is: “I have the sorbus from catania”

Today, the sorbus can still be found in some village festival but also in any fruit vendor who sells them with Conocchie, ready to be hung when you get home.

The sorbus have very ancient origins and were already known in Roman times, who appreciated their tenderness and sweetness and used it a lot for the preparation of liqueurs.

Plinio said in his “NaturalisHistoria”: “Some are round like apples; some sharp like pears. The round ones are more fragrant and more delicate than the others. The others taste like wine “.

with wheat, obtaining “cerevesia”, an alcoholic drink similar to cider.

Surely the sorbus will not be among the tastiest fruits of Sicilian agriculture but they certainly represent a very important cultural element.

Carmelina: What are you doing?

Uncle Peppe: I’m widening the barrel, where I will insert the branches of sorbus, I have to do the Conocchia

Carmelina: Where did the Chinocchie hang?

Uncle Peppe: they are hung on the balcony, outdoors

Carmelina: And when do the Sorbus ripen?

Uncle Peppe: Every day they have to be touched, one is ripe and I will eat it!

Carmelina: Let’s see how this Chinocchia is made

Uncle Peppe: You need the string, first you need to tie the string to the cane

Carmelina: How many did you make at home, many? 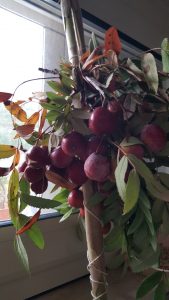 Uncle Peppe: But no, 3 or 4 for us and then some for the friends who wanted to have them. I have a hand that

I can’t even move and it takes a sensitive hand.

Carmelina: Were there people who sold you the chinocchie?

Uncle Peppe: Someone, who owned them

Carmelina: What’s the use of this string?

Uncle Peppe: To hold the sorbus and to keep them from falling

Uncle Peppe: The string is put on top, which is used to hang them out on the balcony and then all the people  passing by looked up and there was someone with the nerve of wanting to taste them!

Carmelina: Of course, hanging on the balcony! 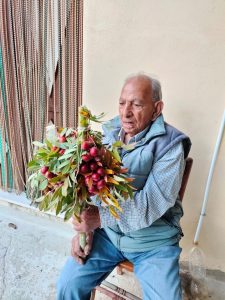 Carmelina: Come on, let’s tie them up and show them … where do you have the other piece of string?

Uncle Peppe: Here it must be, next to the basket.

Carmelina: Say goodbye to all the friends from all over!