The Storiesdancer and the master of Sicilian cane

The Storiesdancer and the master of Sicilian cane 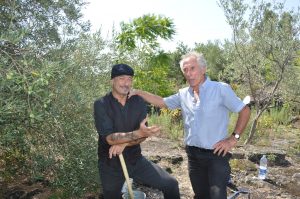 The Storiesdancer moves his hands, shakes his body, rotates the cane! The master cuts, burns and wets the branches! That’s the story of two Sicilian men!

Here we are in Acireale with the Storiesdander and the master of Sicilian cane.

But, what do they have in common?

The storiesdancer tells Sicily trough the gestures of the body and often does so through the beautiful Sicilian canes made by the master.

We enter a storic place: the theater Emanuele Macrì, where once the puppet opera was recited, the show of the paladins that has so fascinated Sicilians since the nineteenth century.

In this theatre, now, the storiesdancer frequently proposes his Sicily made of gestures, dances, sounds.

The Puppet Opera has learned our people.

The Paladins were a symbol of legality, pride, honesty.

The Paladin was one who did the right things, who hated bullies, protected the righteous, taught you how to be in society, taught you respect, education.

I am a Storiesdander and since I was a child I used to come here to see the puppet opera by Emanuele Macrì.

I got passionate about this world of tales, puppets and today I tell Sicilian stories, our nursery rhymes, our myths and legends, and I do it through my body.

We often go abroad and our goal is to spread Sicilian culture.

The Sicily of Sciascia, Pirandello, Buttitta, but also the Sicily of past centuries, the Greeks, the Arabs, the Normans.

We are not just dancer but Storiesdander , we tell Sicily through the gestures of the body

The Sicilian cane is a very fascinating tool, a support for my dance, an extension of my limbs.

Through this tool I am able to express my art even more.

This is the Sicilian cane, it was made during the Aragonese domination, probably around 1400, and was used in a whirling way, especially by shepherds who protected themselves from the attack of wolves that as you well know attack from all sides and therefore the rotation of the cane gave greater field of defense for the shepherd. 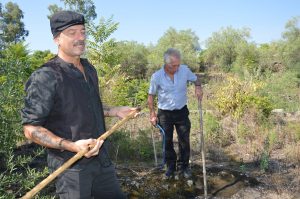 The stick, as the master Sebastiano Cavallaro says, must be collected “quannu a pianta sta dummennu”, that is, when the plant sleeps, in winter.

The branch is carefully chosen, and straightened with a thermal shock that occurs through fire and water.

In this way it becomes flexible and is subsequently massaged with olive oil.

The poetry, the magic of its construction lies in the balance that the master is able to give to the branch, through these burns that change the specific weight of the wood allowing it a balance, which is essential for its use.

His movement is given by the rotation of the wrist while the other hand gives him the direction.

The master after the making of the stick, as if he were a newborn child, kisses him in this way and tells him “you can go to sleep” and puts him near the already big sticks so that during the night they can give him advice and wisdom. 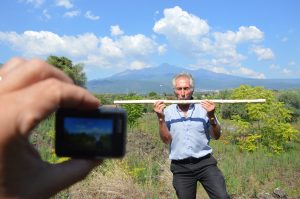 During a duel in the early twentieth century, the master Fichera, who lived in these parts, checked the stick a stone’s throw from the face of his enemy and was praised for his ability not to strike.

Here we are, back in Acireale

Here is the gymnasium where the Storiesdancer and the Master they teach the art of the Sicilian cane.

My respects, how are you?

Young Sicilians learn this ancient art, traditions must always be maintained, they are the soul of a people.

I train with the Sicilian cane to represent my family because my great-grandfather was a shepherd and always wore the stick to defend himself from wolves. 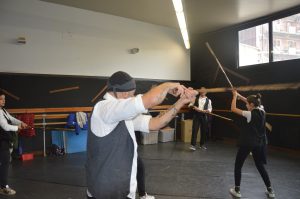 We head towards the house of the Maestro Cavallaro, right in front of the Danzastorie gym.

This is me doing a karate move.

This is me and this is my wife Maria

Then the master shows us a wall full of photos and certificates.

I have done many things in my life: karate, Sicilian cane, spearfishing.

Here while I sing the song “Indifferently”.

Maestro Cavallaro decorates some of his canes with Sicilian colors and scenes, transforming them into real artistic objects.

They are beautiful and although not very light, they are great for walking.

The master promised me to make me one with a dedication!

And finally, as a real Sicilian, Maestro Cavallaro invites us to eat with his whole family.

And, just to digest, at the end of lunch Lusiana, the beautiful granddaughter of the master hits the chandelier with the Sicilian cane! 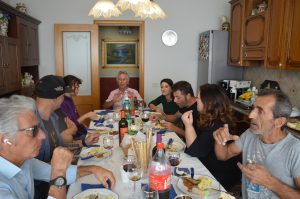