The Storyteller of Sicily: from the beginning to year Zero (ep. 1)

From the beginning to the year Zero

The history of Sicily told by the storyteller

My name is Orlando.

I go around by myself to the land of Sicily and I stop where they welcome me and give me a good meal.

And then the people gather in the square and bring me a comfortable chair and good food.

They wait for me silently to finish the meal.

“We want you to tell us the history of Sicily,” someone says.

And so I begin my narration.

At first there was a big boom and the world was divided into water and land.

A single sea, the Panthalassa and a single land, the Pangea.

Then there were other booms and the Pangea split up to form the continents and the islands, scattered in the sea of Panthalassa. 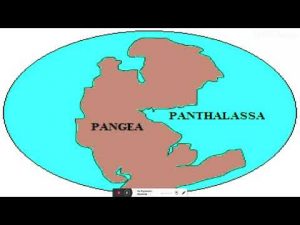 This is the Mediterranean sea, our sea.

Sicily had not yet emerged and was hiding under its waters that were full of life.

This rock called Pietra di Salomone (Solomon rock) knows something about it since 300 million years ago it was right down there, in the seabed of the Mediterranean.

It’s full of fossils since that time and are now in museums all over the world.

Time passed and it happened that about 6 million years ago the Mediterranean dried up, as the small passage that joined it to the Atlantic ocean, the Strait of Gibraltar, closed! 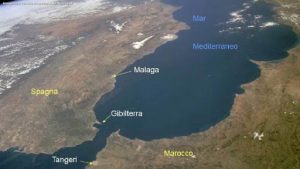 But Sicily, still, could not be seen.

At some point, there was still another boom!

The seabed of the Mediterranean, with all its dead inhabitants rose up like a giant and became a mountain!

And right here that comes up Sicily from the dried up seabed.

And with it everything that used to be under it.

Solomon Stone fossils and rocks and shells of all types and shapes.

And also this drop, trapped 6 million years ago in a gypsum crystal.

It has been going up and down for 6 million years!

Sicily was inhabited by curious animals who arrived who knows how: zebra- horses, hippos, dwarf elephants and many others. 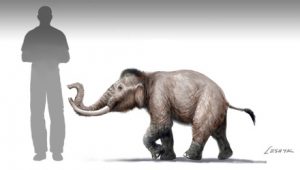 At a certain point human race appears too, and it seems that maybe in some way, there was another lower ring of the water level, and humans passed, by the feet, from the African continent to our island.

The man finds houses in caves, eating shells, and defending himself from a lush fauna and flora.

In this cave  of San Teodoro was found the oldest Sicilian of all time.

We gave her the name of Thea and for those times she was just beautiful.

At least, I think… 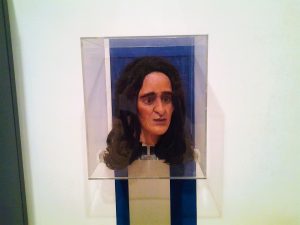 The man gathers in villages.

It build huts, works the stone and tamed the animals.

Some tombs are monumental, others no one can explain how they could have been built: like the 5000 of Pantalica over hanging the valley.

What I think is that they went down with the ropes to dig these graves.

Meanwhile, the time continues to flow…

There were three populations at that time that ruled over Sicily.

The Siculi, to the east, that had their kingdom in the beautiful Rocchicella of Palikè, a wad of lava stone with  a cave where it seems that different warlocks lived.

There were also two volcanic ponds behind.

A wonderful place, today surrounded by orange and wheat gardens, but once upon a time there was a forest and a navigable river!

Their king was called Ducezio and he was a heroic fighter.

Then there were the Sicani, in the middle of the island, who had a king called Cocalo.

He had three beautiful daughters who drowned Minos, the mythical king of Crete, who came here in Sicily in search of Daedalus, the famous architect of the Labyrinth and father of Icarus, the one who flew with wax wings.The tomb of Cocalo seems to be this, at Sant’Angelo Muxaro. 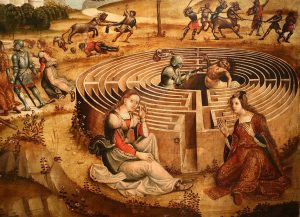 And finally, there were also the Elimi, to the west, who made Erice their stronghold. Here, at the top, was the most famous temple of antiquity, which had a light house that recalled sailors from all over the Mediterranean, attracted by the maids of Venus.

The temple of sacred prostitution!

Meanwhile, a population that came from the Orient dominated the seas: here are the Phoenicians.

They landed in Sicily around the year 1000 B.C. and founded Palermo, Solunto and the splendid Mozia, situated on a small island  just opposite  the current Marsala. 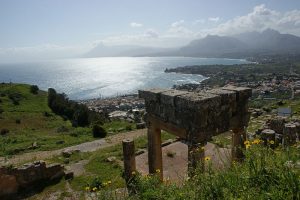 Thisis a wreck of a ship that you can admire today at the Museum of Marsala.

Sicily in the middle of the Mediterranean was a target for all the populations and now even the Greeks are popping up.

We are in the VIIIcentury B.C. and the population of Socrates lands right here, in today’s Giardini Naxos and found its first city.

These Hellenic navigators take Sicilian wives and a new blood line is born: The Siceliota, of Sicilian mother and Greek father.

And since a mother is always a mother, the Siceliota has always felt Sicilian and never Greek.

Zeus becomes the absolute  God and with him all the troop of brothers and sisters: Apollo grazing his flock to the center of Sicily; Poseidon with his trident guards the sea; Demeter is venerated in the fields; Dionisio is celebrates with wine, Hephaestus manufactures weapons in the belly of Etna.

Sicily, with Syracuse Capital, becomes the Queen of the Mediterranean and the magnificence of that time are visible in any part of the island.

The Sicelioti become illustrious and glorious and their names will remain in the centuries. 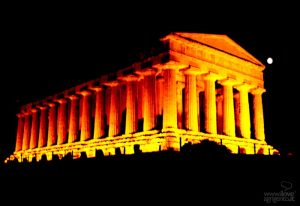 Archimede invents everything, Empedocles is the philosopher of philosophers, whileTheocrito sings for the shepherds and the nature.

The time now brings us to the III century B.C. and the Romans, the greatest power of all time, make their entry inSicily.

They bring the grain and some peace overall.

No more walls, no more internal wars: who was going to attack them?

But everything has a beginning and an end.

And even their empire slowly fell apart … 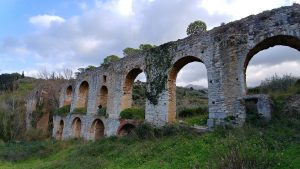