The Strait of Messina: Punta del Faro (or Capo Peloro)

The Strait of Messina: Punta del Faro (or Capo Peloro)

Sicily is connected to Italy by the Strait of Messina, a four-kilometer stretch of sea that can be traveled in less than 20 minutes on board a ferry. 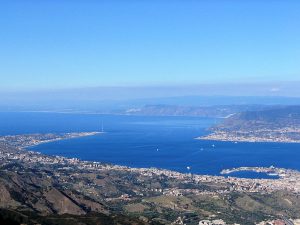 As you approach Sicily slowly you will see Punta del Faro (or Capo Peloro), a strip of sand where a lighthouse is placed that has been there for at least two thousand years and right next to the lighthouse there is a huge pylon that every now and then some joker dares to climb it. 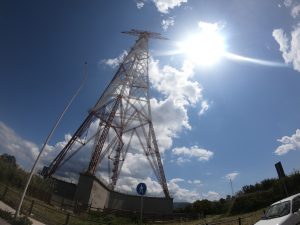 Capo Peloro is one of the three capes of the Sicily triangle: the other two are Capo Passero  and Capo Lilibeo.

In schools all over the world, children know Sicily due to the fact that when the geography teacher talks about Italy he says that it is shaped like a boot and seems to give Sicily a kick. To take this kick is Capo Peloro himself. Children laugh and never forget it for a lifetime. 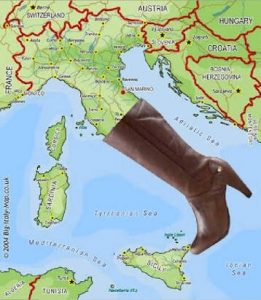 We are in Messina and we are heading towards Capo Peloro or Punta del Faro.

There at the bottom is the very high pylon while in the foreground is the Lake of Ganzirri.

Splendid: “We are in Punta Faro, I have heard that every now and then some joker climbs up there”

He: “And what can we say about it … they are strange people”

Splendid: “Ma’am  if someone comes to Messina what is the typical dish?”

Splendid: “Is it true that there are strange fish here?”

He: “Once a gentleman found a giant squid, right there, over twenty pounds, “ 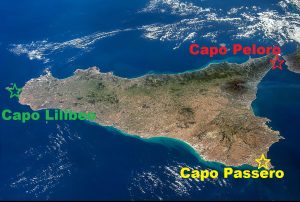 We settle for a Pitone, the typical local streetfood with anchovies, vegetables,

We go to the tip of Sicily among ancient fishermen’s houses many of which have been renovated.

Here is the huge pylon: it’s scary to see it even from below!

And a few meters further on is Capo Peloro: the end of Sicily, right where that fisherman is.

And it is precisely for this reason that in the Strait of Messina there are strong sea currents that give rise to real vertical eddies.

Mythology has it that Scylla and Charybdis lived in these waters, two mythological monsters who swallowed sailors, precisely because of these enormous whirlpools. 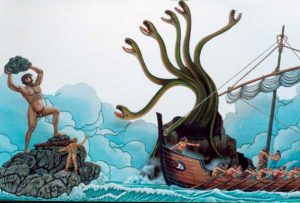 Odysseus knows something about it, who miraculously escaped the voracity of the two monsters.

Another local resident is the Sicilian Colapesce, who loved to spend hours and hours underwater.

One day, going down to great depths, he realized that Sicily, right at that point, was about to sink.

And then he decided to stay under there, to support it.

This is why it is said that when there is some earthquake it is Colapesce that for a moment got tired. 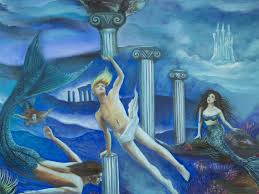 Splendid: “Have you ever heard of Colapesce, Scyila and Charybdis?”

He: “Yes of course, they are our myths”

Every now and then strange things happen around here: you see ghosts of cities suspended in the sky, between Sicily and Italy.

They are the work of Fata Morgana, the fairy of the waters who with her mirages helped the Norman leader Roger of Hauteville to land in Sicily. 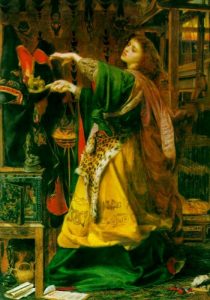 Another curious feature of the Strait of Messina is the presence of strange fishes in its seabed.

They live in total darkness and then emerge, dead, on the beaches of the strait.

They are truly of monstrous beauty! 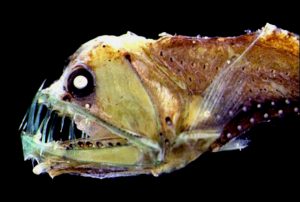 When you come from Italy and it is a clear day you can only be fascinated by the huge mass of the Etna volcano, a giant of 3300 meters that dominates the landscape of the Strait of Messina.

Once upon a time, those arriving from Italy saw a wonderful spectacle: the Palazzata di Messina, an arch of sumptuous buildings along the entire promenade.

The 1908 earthquake totally destroyed it. 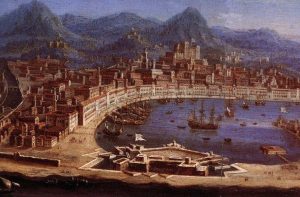 The Strait of Messina, or Punta del Faro, represents for Sicilians the arrival and departure to the island, and has often been the symbol of the forced emigration of many of our ancestors.

The Sicilian singer Mario Venuti sings: “Punta del Faro, you make us leave just to feel the pleasure of returning to breathe and listen to the song that kidnapped us”

One last recommendation: don’t miss  to taste the famous arancino  of the ferry as you cruise the most charming and large island in the Mediterranean Sea.