U vintagghiu (The hand fan)

U vintagghiu (The hand fan)

Hello everyone, I am Agata Sandrone in collaboration with Silvana Restivo we welcome you to this Reportage.

The Hand fan, was born from the need to meet basic needs of daily utility such as cooling, driving away insects, stoking the fire and that  has been transformed into a precious jewel and has marked the style of women’s clothing in various eras through shapes and decorations.

Initially it was made with natural elements: palm leaves, intertwined branches, ostrich or peacock feathers of large size.

An image that probably we all keep in our memory is that of the grandfather who runs around the house brandishing the muscaloru to keep away the insects and the grandmother who waves the Hand fan in the hottest days, reciting the rosary, sometimes interrupted by exclamations of discouragement such as ”chi cavuru oggi!’ (It’s so hot today), ”staiumuriennu!”( I’m dying), ”un ciafazzucchiù!” (I can’t take it anymore), and other memorable bursts of optimism. 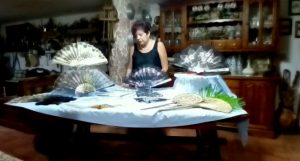 In the 20th century, simple Hand fans were preferred for day time and more elegant ones for the evening; it survived as a valuable object in the gala evenings of the Twenties.

The journey in time leads us in the games of seduction, the Hand fan certainly had an important role, because it allowed to communicate through a non-verbal language in those public occasions that did not allow more intimate approaches.

To  wave the fan slowly: I am married.

To place fan on  lips: kiss me!

To open it very slowly with your right hand: wait for me. 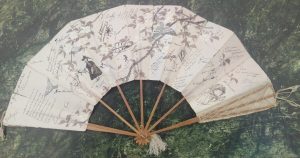 To open it very slowly with the left hand: come and let’s talk.

To hit the left hand with closed fan: write to me.

Holding  the fan with the right hand in front of the face: follow me.

Holding  it with the left hand in front of the face: I would like to meet you.

Closed fan leaning on right eye: when can I see you again? 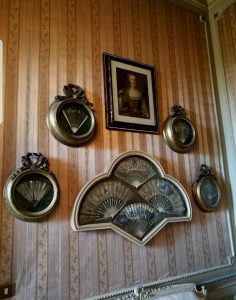 Therefore,  Hand fans were not only used to refresh themselves, but also to secretly communicate with their beloved. A real morse code for the women of the time…

An era in which the freedom of women was indeed very limited, but the females who always know more than the devil, created more than 30 conventional signs with which to communicate at a distance, and without arousing suspicion, with their  lover.

Paradoxical situations arose, with furious quarrels between men who considered themselves recipients of messages from the same woman; in short, the  Hand fan had become a real “social emergency”.

The thing soon came to the ears of the church and precisely to the then Cardinal Sanseverino that, to curb the lasciviousness of the women of Palermo and to prevent the Hand fans from becoming  a reason for disturbing the public order, ordered,listen to this , the seizure and burning … we are at the end of  the 700!

Up to here the story … to which we can also add another old and nice folk tale according to which by observing the way si ci sciusciava  that is waving the hand fan, it was possible to understand if a woman was married  or widowed. 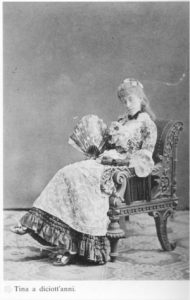 According to this story in fact the fimmina schetta  that is  a single woman opens and closes the Hand fan continuously and she nervously Hand fans herself as if she wanted to say “luvogghiu…luvogghiu” ( I want it…I want it).

Married women, on the other hand,  wave  the Hand fan fully open, slowly and with satisfaction; as if to say. “Ci l’haiu e m’abbasta” ( I have it and that’s enough for me).

Widows, on the other hand, do a different thing: they wave the fan with their wandering hand and with an expression of desire; almost as if to say “Na vota l’aveva e ora un l’haiucchiù”!  ( I had it once and now I dont have it anymore)- So women, be careful how you Hand fan yourself!

The Waltz in the Leopard/Palazzo Lanza Tomasi

The Lanza Tomasi Palace is located in the historical center of Palermo, in the heart of the Kalsa district. It was the last home of Prince Giuseppe Tomasi di Lampedusa, the famous author of The Leopard, who spent the last years of his life there.

His adopted son Gioacchino Lanza Tomasi reconstituted the entire property in the 1970s and lovingly supervised its restoration.

The central hall has a characteristic vault frescoed with oriental scenes from a harem, typical of the late nineteenth century and an exceptional collection of French  Hand fans from the Louis XVI era. Looking through the  Hand fan display case, beyond the historical library of Giuseppe Tomasi di Lampedusa and the ballroom, the view xtends down to the waterfront of the Gulf of Palermo. 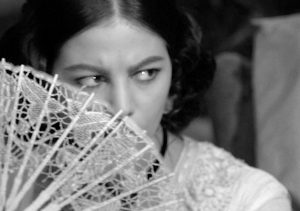 The  Hand fans of the Whitaker collection

The Whitaker couple who lived in Villa Malfitano in Palermo were among the most prominent and representative characters of the late 19th century, icons of a golden age that Palermo lost and never found again over the years.

The wife of Joseph “Pip” Whitaker, Tina Scalia, represented, together with Franca Florio, the main reference point of the high society of Palermo in those years. 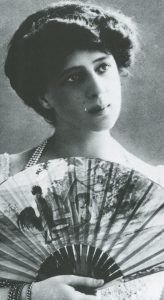 Kings, queens, princes and nobles from all over Europe stopped at Villa Malfitano and everyone left enchanted by the refined hospitality of the hostess. Completed in 1889 on a project by Ignazio Greco, who was inspired by the villa Favarddi Florence, creating an organism in neo-Renaissance style, the villa is on three levels, with a central porch grafted on the southern and northern facades.

The interiors are finely decorated, in particular the Summer Room, which houses the display cases in which  the new Hand fans are kept …

With this, Silvana Restivo and I say goodbye until the next reportage.