When it was cold

When it was cold 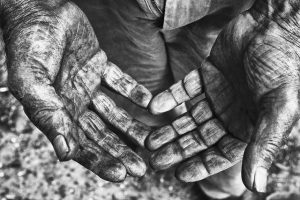 Hello everyone, I am Agata Sandrone in collaboration with Silvana Restivo we welcome you to this Reportage.

Here we collect some memories, curiosities of ancient traditions, and what belonged to the culture of the past. Today we show you objects that our grandparents and great-grandparents used to warm themselves. 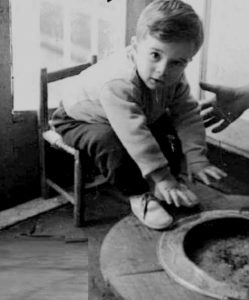 I enter into the character by representing a grandmother of the past by putting on the shawl and sitting next to this object called “cunchiera”, where inside there was placed the conca with the embers.

Above a cunchiera rested u circu, which was used not to let the children touch the embers, but above all to dry the quatrati… the diapers that they used to put on the children.

In the evening the family gathered around “a braciera”  that is the brazier and they told each other stories or how the day turned out. 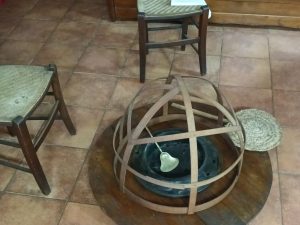 Now let me show you some objects… these are the old hot water bags in metal, while the others are ceramic hand warmers that were used by putting inside hot water.

This is another brazier resting on top of “u trispiti” that is a wrought iron easels, also the charcoal iron was used to heat the clothes that were then placed on the cold and sore part of the body.

Let’s move on to the bedwarmer… this metal container with a wooden handle was passed in the sheets and blankets to warm them. 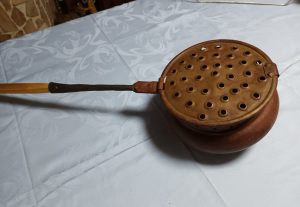 The “priest or the nun” was a strange wooden object that reminds a bit ‘of the sledding and was used to warm the bed, also absorbing any moisture from the sheets. It was formed by four wooden slats, in the base, covered with sheet metal , the warmer rested  with the charcoal still hot. The sheets and blankets were lifted and the “priest or nun”  with the warmer inside, rested on this particular frame.

After a while, the blankets were lifted slowly to not disperse the heat, the priest was removed and we curled up between the sheets, enjoying the warmth that was very different from the frost of the room.

It seems that “the priest or the nun” was so called because, with malicious allusion, it was that thing that heated the bed for the necessary time but without staying  there to sleep. 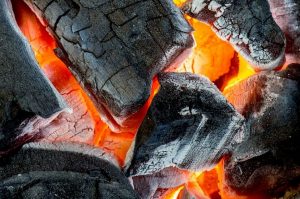 The main protagonist of the use of these objects was the embers… embers that were obtained with the firing of the coal.

The coal, like many other products, was once sold from house to house.

The charcoal burner would pass with his load on the cart and “abbanniava” that is shouting : Accattativi u cravuni!!!   Come and buy the coal

The coal was sold by weight, it happened that a not very honest dealer, wet the coal to make it weigh much more and not feeling with a clear conscience, he behaved in an abnormal way, for fear of being discovered.

This behavior gave rise to the popular phrase: “aviri lu cravuni vagnatu”, that is, when a person has a sense of guilt and behaves like the guilty charcoal burner.

The wood coal, or more commonly known as charcoal is one of the materials most used during  Easter time, Easter Monday, Ferragosto and the various getaway out of town.

But who can forget the taste and the scent that was released throughout the room, when in the almost extinguished embers, among the ashes, they used to roast the dried chestnuts and the winter medlars?

The winter medlars represented a precious supply of food for the winter. Today is little known and it is a fruit at risk of extinction.

The carbonization of wood was a driving economic activity in the Nebrodi territory,

Madonie and Iblei, this is also of the fact that in them has always been kept an

immense wooded territory and has allowed the birth of activities linked to the wood itself,

certainly rich in history and traditions. 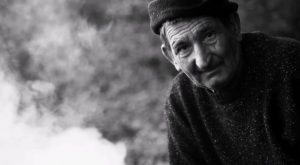 The charcoal burner lived in the woods in homes he himself built “U PAGGHIARU ” that is a house made of hay, this type of work did not allow him to move because the process of carbonization of the wood required 24 hours surveillance .

The charcoal burner, after having transported the wood near the ” GINISATE ” began the

construction of the “FUSSUNI” preparing the wood so as to build a structure of conical shape. The next step was to cover “U FUSSUNI” with dirt after having prepared a layer of branches to prevent the same to infiltrate inside the charcoal pile. 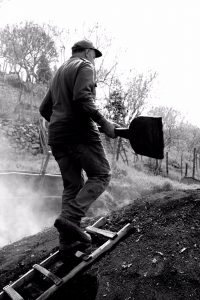 When the construction was completed, it was set on fire through a small slot located at the

base of the “FUSSUNI” called “PURTEDDA” thus began the process of cooking.

The slow combustion lasted about a week (depending on the size of the “Fussuni”), as the cooking proceeded, this decreased in volume.

Once the cooking was finished, the charcoal pile was turned off, with the occlusion of all its openings and then the dismantling.

Then the coal was bagged and transported with mules and carts. for commercial purposes.

Today of “black men” they are a few left, in Sicily they are all located especially  in some areas of the Nebrodi (Mount Soro, Caronia) and Madonie (Castelbuono, Geraci), but also in the Iblei there is still some “old lone wolf” intent on the carbonization of the wood in the respect for ancestral techniques. However, the demand for charcoal is minimal compared to the past..

The traditional system of charcoal burners in the open air, therefore, is gradually destined to disappear completely, overwhelmed by laws, bans and costs that make it increasingly uneconomic for those who do the job and consequently for the market to which the product is destined.

Old tools of the trade:

Nowadays, more modern and comfortable equipment is used, but process is carried out in the same way, but we are witnessing a decline in activity due to the

In the past, charcoal was the basic element for cooking food and for domestic heating. Used by the wealthier classes, it then became commonly used by the popular classes as well until, with the progress and the advent of technology, the systems of heating and cooking changed (in the early 50s Pibigas arrived) and consequently also the type of fuel.

The riddle, which in dialect is called “miniminagghia” is a game on words, sometimes in verses, formed by equivocal or ambiguous concepts, where the thing to be guessed is hidden. Before the advent of television, in the cold winter days, it was usual in the families,  to sit down all around a’conca (the brazier) and propose “the miniminagghi” to adults and children, inviting them to find the solution.

Virdi nasci, nivuru crisci, russu campa, biancu finisci… Cos’è?  It means that is born green, it grows black, it lives in red, ends in white…what is it?

This is all … I Agata Sandrone, along with Silvana Restivo, we give you appointment to the next reportage!!!