There is a magical place in Sicily suspended between the prickly pears, the Mediterranean sea and the huge shape of Etna to watch from the top of its 3300 meters hight.

It is called Cafè Monte Venere, and it is a cafe that no longer exists!

It is in the road that connects Taormina, the pearl of Sicily, with the countryside of Castelmola, where many wealthy foreigners have been vacationing since  the 1800.

Many were French and even today the district is called “a francisa”. 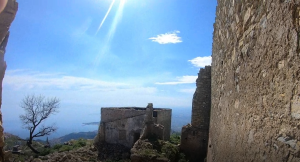 Cafe Monte Venere was a mandatory stop for aristocrats and tourists who crowded Taormina yesterday as today.

We enter the paths that lead to the Cafe, with a breathtaking view.

Imagine the carriages and mules that accompanied customers up here.

A great frequenter of Cafe Monte Venere was Frieda, the wife of the writer Herbert Lawrence.

They came to Taormina because the English writer was suffering from tuberculosis and Taormina was said to be an excellent place, to cure it thanks to it’s healthy air.

Here his wife Frida was accompanied by the mule driver who later became her lover.

And she told her adventures to her husband who drew the masterpiece: Lady Chatterley’s lover.

They were the best selling cheating story in history!

And this cafe witnessed it.

Like many gays, playboys, beautiful women and intellectuals from all over the world who lived in the splendid Sicilian city.

Here we are: this must have been the entrance or perhaps the kitchen.

The tiles are beautiful, the view is sensational.

This is the tank.

That was the bathroom. 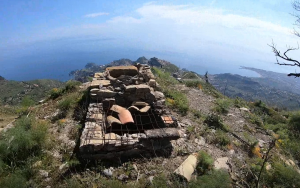 How exciting , here’s the real cafe.

It was on two floors.

Here is the main room.

Let’s imagine one of the many picturesque travelers who drew this enchanting panorama in front of him.

If you come to Taormina take a walk up here and then even higher if you want, up to Monte Veneretta.

Venere translated into English is Venus, the goddess of love, beauty and pleasure.

Perhaps there was a temple up here dedicated to her. 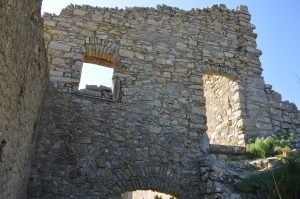