Empedocles was born in Akray, the Greek Agrigento, around 444 BC, between the seventy-fifth and ninetieth Olympics.

His father was a certain Metore, of noble lineage, who gave his childrens the highest education.

It is said that a sister of Empedocle, on the death of her brother, set on fire one of his writings because she did not consider it appropriate.

Empedocle married at a young age, had a daughter and a grandson of the same name, who was the author of tragedies.

He traveled a lot, even coming to Egypt, then considered a school of knowledge. Then he deepened his studies in Persia and returned to Sicily he opened a school of rhetoric that had, among the various followers, the talented Gorgia of Lentini.

Later he went to Turio, in Lucania, where he joined the Pythagoreans and began the study of medicine.

Returning to his homeland, he practiced this profession without wanting to be paid by the poor so much that he was considered as a god. 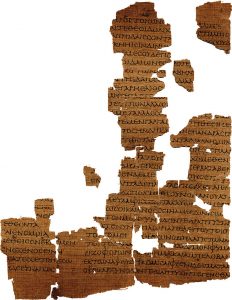 He also helped the people of the nearby and powerful Selinunte to make unhealthy waters healthy.

He was appointed legislator of Akrai with the aim of establishing a government that would give stability to the powerful and rich Sicilian city.

It is said that the Agrigento people were so rich that they built houses and organized banquets as if they were to die the next day.

Empedocle on the contrary always preached a moderation in customs and vices.

He was loved by his fellow citizens who wanted him in power.

But he, following the Pythagorean doctrine, replied that the wise must lead not by force but by wisdom.

His poems were so sublime that they were read at the Olympics along with those of Hesiod and Homer.

Two works of Empedocle are preserved: “On Nature” and “Purifications”, in which the mystical element mixes with the religious giving life to a thought that over the centuries has been exalted by all the major philosophers.

For Empedocle, man, being of divine origin, will achieve true happiness only after death, when he reunites with the company of the gods.

Empedocle was really everything, excelling in everything: philosopher, magician, scientist, poet, musician.

The legend wants him dead inside the crater of Etna where it seems he threw himself in an attempt to challenge the fire.

It seems that the volcano, in his honor, held the body but pushed his famous sandals back to earth.

His fellow citizens erected a statue in his honor which was then taken by the Romans to their homeland.

So great was the opinion of this man, so much his name was sacred and respected.

Text inspired by: “Biography of the illustrious men” of Sicily by Giuseppe Emanuele Ortolani, 1817