Savoca: when Sicily fulgurates you in a couple of minutes and makes you his prey for eternity

In this episode: A ton of proverbs, donkeys, bees with the engine, godfathers and mummies! 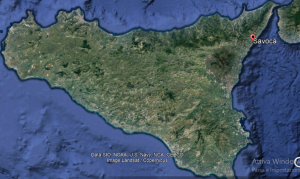 The magic of Sicily

Today we arrived in Savoca, eastern Sicily, at 300 meters above sea level.

It is early morning and like, the Sicilian proverb says: a matinata fa a jurnata (waking up early in the  morning you have more time to do things during the day).

Things that only Sicily can give.

Sicily  as a cupid arrow  knocks out hearts from all over the world.

A magic full of stone, history, Sicily to the latest power and breathtaking views.

A few live  in Savoca, including several foreigners and live a life of genuine peace and Sicily.

The Ionian Sea, at  not even 5 kilometers, today  offers a wonderful photo of itself.

You can also see Italy. 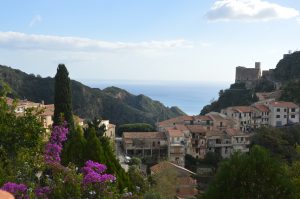 Here in Savoca, about twenty years ago, we came on behalf of the  Italian Public Radio to interview the mythical Miss Maria D’Arrigo, owner of the Bar Vitelli, where Al Pacino asked his beautiful daughter Apollonia in marriage to Mr. Vitelli,  do you remember?

Does the Godfather tell you anything?

She: Of  Al Pacino I remember that he was always here near me quietly, because he did not know a word of Italian. While Coppola was terrible, he always said bad words! I remember that in those days it was very hot and while Coppola was cool under the umbrella the actors had to try and retry the scenes and were beated by the heat. The others sweating and Coppola that always screamed.

Well, as a Sicilian would say: a iaddina fa l’ova e o iaddu c’abbrucia u culu!  (The hen makes the  eggs and the rooster has his butt  burning!) 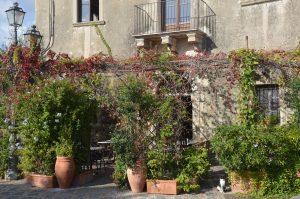 It was a Savoca still almost in the shadow, then like today, from the great Sicilian atmosphere.

And for this reason Francis Ford Coppola chose it as one of the Sicilian places to Immortalize for the Godfather.

That’s the chair where we did the interview with Mrs. Maria, the same one where Al Pacino sat.

Today Maria is not there anymore and this episode we will  like to dedicate it to her.

The bar is still there: its very sicilian and it makes very good  granite. 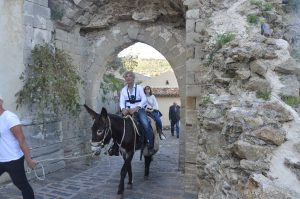 Savoca inevitably leads us back in time, in an old-fashioned Sicily.

And let’s get the Scecco then which means donkey in sicilian!

Just beyond the Bar Vitelli we arrive at the seventeenth century  Capuchin convent.

We are welcomed by the custodian, Mrs. Grazia, who has a liking  for us  and allows us to  visit the inner parts,  where the monks lived.

She: Here we are in the refectory, where the capuchin monks ate  and even here you can see paintings of  the 1600.You can be housed inside the convent and the lady show us the rooms. Then she takes us to another forbidden zone, the choir, where the monks sang during the mass.beautiful Gregorian chant, huh?

From the terrace of the convent you can see all  the small  Savoca, a scarf wrapped around the neck of the cliff.

Mrs. Grazia now takes us to the crypt where 17 mummies of famous Savocesi rest: These seem to be dressed with the latest  style!

She: Here in Savoca was produced the Silkworm and the clothes were made on the spot. You see what a nice pout has this.

Oh, my God! I’m dizzy with all these mummies! 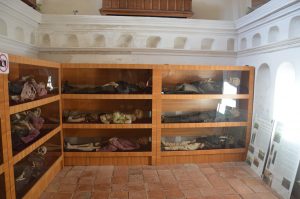 Hello Baron Altadonna and I salute you too monk Bernardo!

This is the youngest of all, he is just 200 years old and he looks great for his age: the priest Trischitta.

Goodbye dear Mrs. Grazia, will you get embalm?

She: No, today is forbidden!

Well, let’s take a nice picture together before we go away.

Proverbs and the bella Apollonia

We get the scecco and we go into the heart of the small village.

Uhmmm… How strange… The proverbs  continue to whip in my head.

Listen to this: cu di sceccu ni fa mulu u prima cauciu e ddo so! ( Who makes of a donkey a mule the first kick is his!)

So little donkey, do not get  offended , you will remain a donkey  at least for today because if I call you mule you will let it get to your head and you’ll start to  gallop.

The fascinating peculiarity of Savoca is also  its urbanism: a square and a single street, of medieval charm, that with a sort of horseshoe trajectory rejoins the square for a total of not even two kilometers.

The center of this horseshoe, which  is a wall, on top, of a cliff: probably  inhabited since the Roman times and today with the  ruins of a castle of at least 1000 years old.

The scecco , passes the medieval gate of the XII century, and  leads us into the village.

We’re  only missing  the shotgun and we would be the perfect Sicilian from the past.

The scecco stops behind a house and  nods at  us to get down.

Nar: And who are you?

She: What do you mean who I am? I’m the mother of  the beautiful Apollonia! 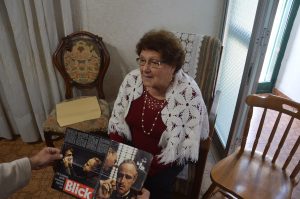 Mrs. Vincenza a real Savocese, was an appearance recruited by Coppola to play the part of the mother of Apollonia, the beautiful Sicilian of which Al Pacino falls in love.

She: But, listen who gave you my number?

She: Don’t tell  lies that your nose will grow, you know! Have a seat. This is Al Pacino who brings a gift to Apollonias  mother.  Come in, come to the living room.

Here Mrs Vincenza  Apollonias  mother I have brought you a bottle of wine.

She: This is the day of Apollonia’s wedding and thats the man that they  used to say that  was my  husband, but my husband, the real one, was more handsome.

Then the lady invites us to eat  somenthing to be accompanied  with bread , which is seasoned with salt, pepper, oil and oregano; and also olives and salami from Sicily.

She tells us a little about  Sicily of the past, some nursery rhymes and also  speaks  of her  children.

Then we take a nice souvenir photo, we greet her and pick up the donkey.

Look at that beautiful sculpture!

It represents Savoca and is located right at the entrance of the village.

A local artist did it: Enico Salemi.

There is the Sambuco, symbol of the village, the Capuchin monks, the castle, the churches and the mummies!

The little donkey brings us now to the Civic Museum where the director Santino Lombardo is our guide.

There is a room dedicated to the godfather of course and of a lot of  Sicily.

He: The characteristic of the place is that the objects are accompanied by Sicilian sayings.

Ah, that’s why they come up  to my head every minute.

He: U sangu da terra è l’acqua; u sangu di l’omu è u vinu. (The blood of the land is water, the blood of Man is the wine).

There is also a torture cage : that  I’ve never seen!

It was stationed here in Savoca, in the prison, and the suspects were immersed in the well until they confessed.

He: This is a saying that commands the whole world: “Ppu pilu e pu manciari s’ammazzani animali e cristiani”, that is, (for  woman and  food you would do crazy things)

In Savoca as in the rest of the world! 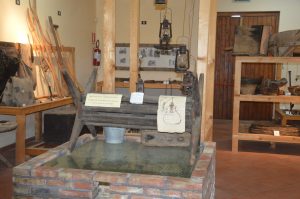 In the hearth of Savoca: a journey in the past

Sadly we leave the donkey,  who must go to eat.

And a bee takes as!

A moto bee of course!

As we go inside  Savoca the view opens to the sea. 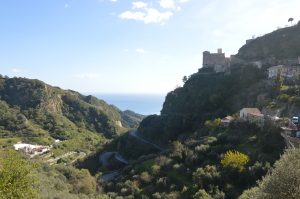 Ehy, this is the church where Apollonia go married to Al Pacino!

It is the church of San Nicolò, splendid, of  the 1250 also called the Church of The Godfather.

I recognise Mrs. Apollonia behind the bride and groom!

“This is the only church in the world dedicated to the Godfather! They usually dedicate them to the Saints…”

We  go back to  the Moto bee and arrive at a small open space.

There is a house with an extraordinary double lancet window of 1400.

Here there is also the mother church, built in the XII century!

In this church were mummified the bodies that were then taken to the Capuchin convent.

Splendid Local: This chair, ancient of centuries, is perhaps the oldest object of Savoca and to which we are very attached. It was the chair of the religious leader of the monasteries of the area.

It is irresistible for us, as usual, to climb  to the bell tower.

We go on foot and puff puff …pant pant … We arrive at the viewpoint of the village.

From up here  the view is magnificent, a triumph of nature.

Savoca is a wonderful place where several foreigners have bought a house  and live there.

Even today you can find something to buy among the ruins of the past.

And we sneak in one of these houses in the  hope that it won’t collapse.

Brrrr what a fright … Here  everything trembles.

U fuiri e vergogna ma è salvamento ri vita. (Escaping its a  shame but it is life saving) 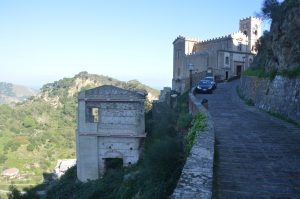 We continue our walk in the Middle Ages and this time we try to sneak in a inhabited  house .

Nar: Ehy, is there someone, can you hear us?

She: Who are you?

Nar: We are Sicilian travellers in Sicily. What about you?

Sirpa, the Finn, lets us in.

She’s 84 years old, but she looks 20 less,she says that she was a cartographer, and has an  Italian citizenship, that  came to Sicily for vacation and then fell in love and decided to stay here all her life.

She: Come I‘ll show you of what I fell in love with in this house.

My goodness, what a wonderful view!

Good weather and bad weather dosent last the  all time

Now it’s time to go back.

We catch three elderly ladies seated in a small alley, perfect  prey for Splendid Sicily, and even if we are in great delay we get guided by the Sicilian saying that says: : Bonu tempu e malu tempu non dura tutto u tempu (Good weather and bad weather dosent last the  all time).

And these three are a nice shot of good weather to catch all at once!

We talk about Sicily of the past to one of them three, listen, wore you a part of a famous photograph for an advertising company,  that was taken here in Savoca that recited like this: the beauty and the 7 beasts.

The ladies  knew nothing about this slogan believing  that they were posing for  an Ads company for a  charity purposes .

And in this stunt they all stink: who invented it and who put it into practice. 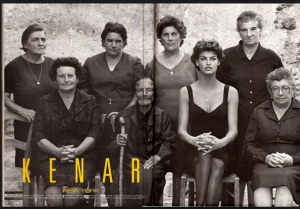 Now it is really time to return but not without  stopping by  the master Nino Ucchino, a brilliant sculptor of the iron with his  works exposed all over the world.

He also , here in Savoca, found his inspiration.

We had a great time in this wonderful place.

Goodbye Savoca and  have a splendid life everyone. 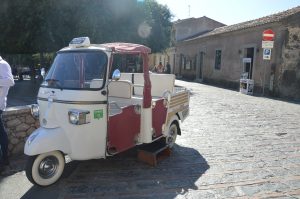